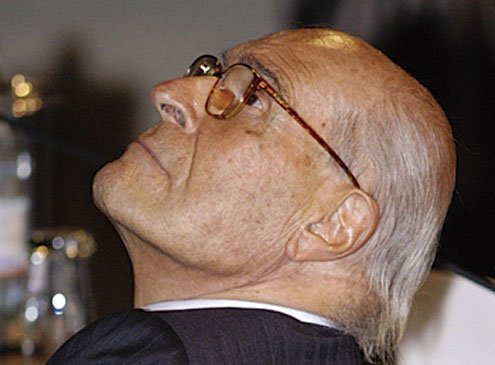 Umberto Veronesi, 81, is a researcher, surgeon and oncologist who focuses on breast cancer. He is scientific director of the European Institute of Oncology in Milan, which assembles some of Europe’s foremost cancer specialists. Before that, he founded and directed the National Cancer Institute in Milan. He was Italy’s health minister between April 2000 and June 2001. In 2002, he established the Veronesi Foundation which sponsors medical research projects in Italy and abroad. He is considered a pioneer in breast conservation among women afflicted by cancer. Kristine Crane spoke with him at the Fondazione Cini at Venice’s Isola San Giorgio during the “The Future of Sciences” conference organized by the Veronesi Foundation. It brought together international scientists, politicians, ethicists and economists.

What was the idea behind having a conference called the Future of the Sciences?

The world of science works a bit too much in isolation. Science has outpaced society, influenced by technology, which moves according to the rigors of the market instead of society’s needs. In a globalized world, we need to better define our priorities on the planet.

So the Carta di Venezia that was presented at this conference addresses that?

The Carta di Venezia is a series of points that we consider a priority: ridding the world of hunger; preserving the ecosystem and biological diversity; reducing the infant mortality rate; reducing the use of combustibles; eliminating pollution; fighting HIV, malaria and cancer; guaranteeing water. But science has not made huge investments in these areas. Instead what does it invest in? Making mobile telephones. [What if] this enormous amount of money was dedicated instead to intelligently studying how to improve agricultural resources in Africa, constructing an institute in Africa, but doing it there and not here, sending 2,000 scientists there instead of making mobile phones? The scientists are not working with the politicians and philosophers and economists; they move ahead on their own. So there is no worldwide strategy for research.

Is there a connection between pollution, shortage of energy resources, and cancer?

It’s what we mean when we talk about globalization: Everything is connected. A chicken infected with the avian flu virus in Malaysia arrives here after a year and infects someone. An intelligent barrier against a possible viral pandemic is a need. We risk a pandemic, not just an epidemic, and we are unprepared. If it were to happen, we would die because we don’t have pharmaceuticals against viruses. They don’t exist. We have to vaccinate ourselves, and we don’t do the vaccinations in time. We have to do this rapidly before there is an explosion.

Has there been an increase in cancer?

People are living longer so we are discovering more tumors. Before they passed unnoticed. Food introduces environmental carcinogens into the body.

Is that why you are a vegetarian?

I am a vegetarian for ethical reasons. I love animals, so I don’t want to eat animals. I come from a family of farmers, and I must say that meat was rarely seen: vegetables, bread, grains, polenta and pasta. Now there is an abuse of meat. There is a growing parallel between the incidence of cancer and the consumption of meat.

Could cancer be caused by the hormones in meat — is there a link between hormones, as in hormone therapy (HRT) and cancer?

Hormones are not particularly carcenogenic. [I understand] there is a movement against “medicalizing” life. I agree, but you have to weigh the advantages and disadvantages. I am for the quality of life of women. Why not menopause 10 to 15 years later? The risks of breast cancer [in taking hormones] are minor. Hormones decrease intestinal cancer by 30 percent, which is a much more dangerous cancer [than breast cancer]. Hormones never increase the mortality of people, and for certain cancers, it can actually assist recovery.

Will we see a cure for cancer in this century?

Yes, in this century certainly. We must do it. We are moving in two directions. We are conducting major studies on DNA and studying how the illness comes about through mutations in DNA — so that we can arrive at preventing those mutations. We are still years away. The second direction is curing malignant tumors, and we are moving towards early diagnosis… With the revolution in imagery, today we can identify and destroy cancers to the millimeter, also without surgery or radiation.

What’s the link between genetics and cancer?

Genetics must be examined intelligently. I am talking about somatic [physical] genetics, not DNA, or hereditary matters. For example, tumors of the uterus are due to a virus. You may have a family where three sisters have a tumor of the uterus, not for genetic reasons but as a result of viral contamination. A lot of tumors are caused by viruses. [Only] five percent of breast cancer tumors and ten percent of intestinal tumors are “genetic,” meaning hereditary. Most tumors have both known and unknown causes.

The fear is no longer justified. What is one millimeter and what is much larger are both called cancer. This is also our mistake. We have to change names.