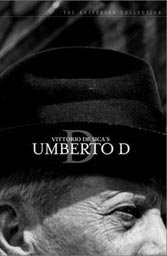 Released in 1952, “Umberto D.” led then-Italian Culture Minister Giulio Andreotti to publish an open letter to director Vittorio De Sica and his fellow neorealist filmmakers in which he strongly opposed the “washing of dirty linen” in public. De Sica and playwright Cesare Zavattini together scraped off the glossy veneer of contemporary filmmaking to create bare raw, basic, and deeply human stories that came to define the Italian postwar neorealist movement.

This is the story of the travails of a lonely old man sinking into the quicksand of poverty. His struggle to maintain his dignity only pulls him under faster. Umberto D. — Umberto Domenico Ferrari (Carlo Battisti) — leads us along the streets of postwar Rome, weaving in and out of soup kitchens and piazzas. Viewers eavesdrop into scraps of strained conversations between him and the people he meets on his daily wanderings.

A tall, skinny man with a mousy mustache and bags under his eyes, he is, except for his mongrel dog “Flike,” alone in the world. Knee-deep in debt, he strives exhaustedly to raise money so that his landlady (Lina Gennari), eager to be rid of him, can’t evict him. The only person to whom he speaks freely to the young, pregnant housemaid (Maria-Pia Casilio), but there’s little she can do but witness his decline.

Battisti, a linguist by training with no dramatic training (this was his only film), doesn’t work toward emotional or dramatic impact. Instead, through subtle understatement, he honestly portrays a man attempting to cling on to the last remnants of his pride. By focusing on loneliness, old age, and poverty, Umberto D., glides like the saddest of ballets: elegant, haunting, but never forced.