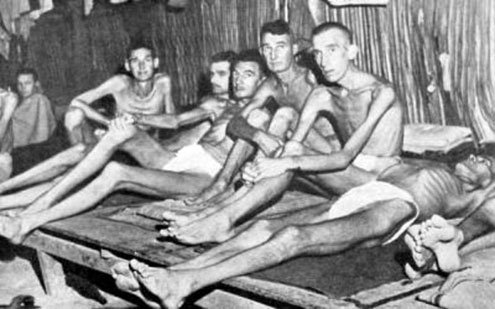 Thousands of Allied POWs died in appalling conditions building the so-called "Burma Death Railway," on which Flanagan hinges his novel.
A

ustralian novelist Richard Flanagan’s “The Narrow Road to the Deep North” (London: Chatto & Windus, 2014) deservedly copped the 2014 Man Booker Fiction prize. This sweeping epic of the battle-savaged 20th-century follows the odyssey of Dorrigo Evans, beginning with his World War I childhood, continuing into his Second World War internment as an Asian Theater POW, and covering later civilian decades that see him haunted by war memories.

Flanagan has a master craftman’s control of non-linear time. In the novel’s few first pages we’re catapulted forward to Evans in old age as he mentally revisits his senseless and brutal POW years. The pages detailing camp life will soon become the novel’s heartland and the thread that interlaces all his memories.

The camp saga begins in 1943. Japanese troops capture Colonel Dorrigo Evans’ 1,000-strong Aussie unit in Java. Japanese commander Colonel Nakamura announces a new and “exalted mission” to realize Emperor Hirohito’s dream of a 400-mile rail line running northward through dense jungle from Bangkok into Burma. Without heavy equipment, the POW slave laborers must cut through 80-foot high bamboo and clutching overgrowth. History will call it “The Burma Death Railway” (a story covered by French novelist Pierre Boulle in his 1957 “The Bridge Over the River Kwai,” later to become a wildly popular movie.) Never operational, the railway was perfectly functional in one awful sense — it killed the men who toiled to build it.

Evans’ contingent gradually begins dying off through starvation, malaria, and the burden of 70-hour work shifts. His 1,000 soldiers drop to less than 400. A few, like Darky Gardiner, are beaten to a pulp as their helpless comrades — and their colonel — are forced to watch them die (records suggest more than 6,000 Allied prisoners perished during the construction effort, later singled out as a Japanese war crime).

Yet Flanagan evinces deep sympathy for both Australians and Japanese. He uses fine, delicate Haiku as chapter prefaces. He insists on giving Hirohito’s loyal soldiers a human dimension. It is Evans who never forgives them: “They were monsters.” This contrast in approach makes for a puzzling if not jarring clash between author and protagonist. Especially when Flanagan is at some pains to create a do-no-wrong hero.

For Evans is consistently made to stand out. He is a man of grand passion and moral honesty (womanizing and drink rarely carry negative weight in epic literature). He is capable of astute calculation, has unique leadership skills and intelligence, and a natural drive to confront life in lofty terms. He goes by many names: Colonel/the Big Fella/Dorrigo/Dorry/Doc/Sir/Surgeon or Aylwyn Evans.

To his Tasmanian family and his friends, he’s Dorrigo, after his father’s hometown in New South Wales. World War I impresses two events on his young mind. One is neighbor Maguire seated at the Evans’ table, weeping uncontrollably. This is Dorrigo’s first contact with tragedy, and it leaves a mark. His mother’s explanation for Maguire’s tears is one he will have occasion to remember throughout his life: “The world is. It just is.”

He also recalls his older brother Tom, a veteran. Once home, Tom refuses to speak of the war. One day Dorrigo glimpses him leaning into Mrs. Maguire’s neck. Why?

In this perfectly constructed fiction, these small memories will silently — and poignantly — enter the larger weave.

Our later view of Evans is as a surgeon and soldier stationed in Adelaide, where he falls deeply in love with his uncle’s wife, Amy Mulvaney. Her eyes are “the blue of a gas flame.” To his death, Amy is the fire in his heart: “Amy, amie, amour.” She alone calls him “Dorry.” She’s also the only person who comments on Evans’ habit of reciting memorized lines of poetry aloud. “Don’t you have words of your own?” she asks.

In the event the reader has missed Flanagan’s consciously epic intent, note Dorrigo’s constant citations from Alfred, Lord Tennyson’s “Ulysses.” A favorite: “To strive, to seek, to find, and not to yield.”

Hearing of Amy’s death, he murmurs his mother’s mantra: “The world is. It just is.” Later, he marries dull, unloved Ella, who waited seven years for his return from wartime service. Her family’s social station in Melbourne helps Evans rise to key hospital posts, and to international surgical fame. Only once do we hear Ella call him by name, and it’s “Aylwyn,” Evans’ given name after all.

In the POW camp, Evans’ men called him “Colonel” to his face. But privately he was always “Big Fella,” a strong man with a ragged but jaunty red bandana neckpiece and an unwavering sense of solidarity and loyalty that his men strived to live up to. The price for that was high.

Wartime memories forge links between Evans’ childhood, his middle years, and his later life. Over time, he’s often interviewed as the “Commander who survived the Burma Death Railway.” And what words, he asks, can ever make sense of that?

Evans is a versatile hero of many parts and Flanagan transforms his lifelong stoic courage into a fierce narrative that serves as a burning reminder that both our past and ongoing century are, in fact, defined by our previous wars.