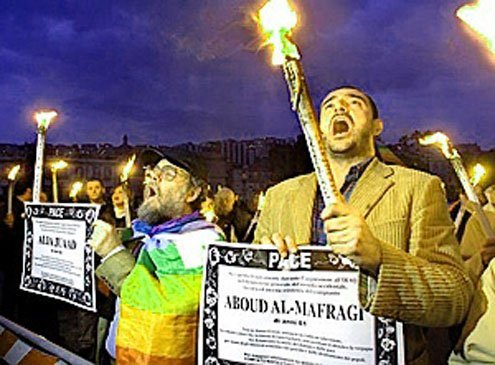 little blue spark shines in the dark for an instant. Nothing. Second attempt. Same result. Third attempt. Nothing again. On the fourth try the little blue spark finally turns itself into a little flame. Not much, but just enough to light a cigarette. In the darkness I can see Michele’s chin and nose. Not his eyes. I hear him inhale the smoke, slowly and voluptuously. The red dot of his burning tobacco moves to the side: “Yeah, I understand your point. I know what you’re trying to say.” He lets the smoke out, careful not to blow it into my face. “But I can’t agree with it, we have to demonize them.”

“Them” is the Americans.

Them, “loro” in Italian, is a word you stumble on easily when you start living in Italy. No matter how good your Italian you won’t be able to guess the “loro” the speaker has in mind until you’re well-trained.

In case you’re not yet familiar with the word, here are some brief and practical tips:

The reason “loro” is such a popular word is that it has no precise meaning. It can be refer to anyone or anything: Men, women, dogs and kids, you can squeeze them all together into “loro” There is no better word to exercise the power of arbitrary will.

WARNING: Before unwrapping the word and using it in your daily Italian, we strongly recommend you keep in mind that the people you’re speaking to shouldn’t belong to the group you’re calling “loro.” If they do, well, chances are you’re in trouble.

Typically, social drop-outs, the unemployed, immigrants and gypsies, get the “loro” label. The word is pronounced condescendingly to underline the deep difference between the them and the us, those on the margins and honest well to-do citizens.

Such comments usually annoy me deeply. Yet, it is only when “loro” refers to “gli Americani, ” Americans, and only when I detect that peculiar intonation that means “those Americans with whom we peaceful and cultured Europeans want nothing to do with,” that I feel personally hurt.

This may be hard for the reader to understand. I was born and raised in Italy, my parents are both full-blooded Italians, and I don’t have a single relative who isn’t. Why should I have anything to share with “those Americans?”

It all started when I spent a high school year the United States in 2001, and fell desperately in love with the country.

But having a “special relationship” with the United States nowadays doesn’t win you friends or influence people. In my case, though, two additional factors complicate matters. First, most of my Italian cohorts hold liberal views; second, as a political science student, most of my friends love to talk about international politics. Targeting America and Americans becomes the subject for debate each time we get together. Outing after outing, dinner after dinner, I sit at the table staring at my glass of wine feeling suspended between incompatible worlds: them, the Americans, and us, the young Italian political science students of Florence who oppose the war in Iraq, and by association the American superpower behind it.

Just after 9/11 it seemed as if the distance between Europe and the United States had magically disappeared. “We are all Americans,” the media here repeated.

The attacks occurred three weeks after I arrived in the United States to start my school year. I remember watching TV as the towers collapsed. The more I looked the more I felt ashamed for remaining calm and, it seemed, almost impassive. See that? See that building? It is full of people! I tried to make myself realize what was going on. Then, something unexpected crossed my mind: What if that happened in Italy? I was puzzled by my own reaction. I never imagined myself a patriot, but as soon as I thought of the Coliseum burning down my eyes went teary. Exactly a year later, at the end of my exchange year, I switched on TV and saw the Twin Towers images again. The second time I did not need to think of the Coliseum.

I returned home deeply convinced of the need to make people understand what happened to me during that time, between 9/11 of 2001 and 9/11 of 2002. I wanted to let them know that living in the U.S. had made me grow fond not just of some people in particular but of a country itself, as a whole.

Yet, at the same time, I also wanted every one to know that I was ready to join the street protests in Rome and Florence against the war in Iraq. “I will explain them,” I thought to myself, “that I have started to feel towards the United States the same way I have always felt towards Italy.” While there were aspects of Italy’s culture and society I detested, I felt Italy was where I belonged. It was quite obvious that, as an Italian, I could never protest against Italy. But if that was the case it was also true that I couldn’t protest against the United States. I could only protest to change it.

Timing was not on my side. Anti-Americanism was rising throughout Europe as the U.S. moved toward Baghdad. It was not the best time to oppose the political conduct of the (still very popular) White House, and at the same time to profess love for the United States. Understandably enough, to many people, including most of my friends, this sounded like a blatant contradiction.

Unable to get through to them, I often felt my situation similar to what many Americans living in Europe were (and probably still are) experiencing. Confronted with anti-Americanism, I thought, an American expatriate with liberal views can: a) Rescue their patriotic soul and feel terribly wounded in their patriotic pride; b) Wear the famous “I am a Canadian” T-shirt and pretend they have nothing to do with their country; or c) engage in the dubious mission of spreading “intercultural understanding” among neighbors or colleagues.

The latter probably sounds like the most noble solutions, but trying to change people’s minds with words is rarely fruitful. If you try, you’re likely to get involved in lengthy pseudo-political discussions where, if pushed to the wall, you’ll most likely end up taking a stance on positions you never meant to support. Depending on whether you woke up feeling “American” or “liberal,” you’ll find yourself blathering the corniest pro-Bush propaganda, or join the anti-American choir.

Take the first position and you’re patronized, “In the end you’re like all the others.” Take the second and you received a pat on the shoulder and a chilling remark, as in: “You’re not like them, you’re the exception!” But we call know exceptions confirm rules, and so on.

It was my friend Michele who made me realize the problem. He’d just come back from a trip to Mexico. He said he’d stopped a few days in Atlanta. When he described the people he met at the hotel he said something like, “I was surprised! I met some really intriguing people, and people who were actually nice!” I had to smile at this. What a fool I’d been. A few jokes among guests in a hotel lobby reception area had had a greater effect on Michele than all our endless political discussions.

There’s a German saying that goes “Zu verstehen heißt zu entschuldigen” (To understand means to excuse). My experience in the United States made me believe that this isn’t necessarily true. But being back in Italy I’ve come to believe that whether it’s true is up to everyone to decide alone, and on their own terms.

Erica Alini, who wrote this commentary in English, studied political science at the University of Florence. Her email address is ealini@yahoo.it

About the Author: Erica Alini

Erica Alini was born and raised in Milan. After spending a year of high school in Washington state, she decided that reporting about international affairs would be a sweet way to make a living. She earned a BA in International Relations from the University of Florence in June of 2006 and moved to Washington, D.C. to continue her studies at the Master of Science in Foreign Service at Georgetown University. She is writes features and blogs for DC-based Foreign Policy magazine (blog.foreignpolicy.com). She graduates from Georgetown in December 2008.