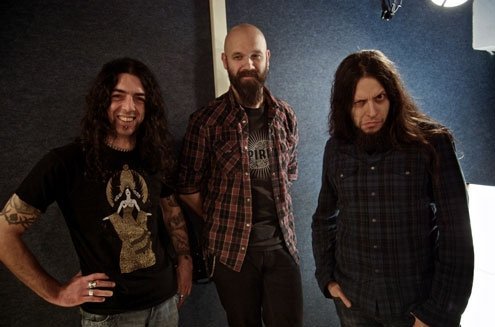 ecember is a music writer’s slowest month. I spent most of it sorting through 2010 releases to find my favorite Italian album and label. The results were gratifying.

I’m told Ufomammut is either Italy’s best worst-kept secret or its worst best-kept one. Neither should apply in the wake of the band’s fifth album Eve (SupernaturalCat). The Milanese metal trio have been together for the better part of a decade, but with July’s Eve they capped a career arc that has copped the dirges of past provocateurs like Earth and Swans, except that Eve finally feels like their own.

On past releases, the band stretched out songs to the marathon half-hour mark to set a tone of doom and gloom. Eve doesn’t need such blatant climax-building. It shifts seamlessly through each of five parts, technically one song but clearly distinct. The power of the music makes muddled b-movie snippets and stretched-out vocal growls into mere pageantry.

Every guitar riff is massive. Every unleashing of Poia’s skull-crushing guitar intensity is made better by repetitive chords that work slowly, quietly, carefully. Vita’s pummeling drums and Urlo’s anchoring bass add to the experience. A thundering ode to earth’s first woman, Eve is as good a doom-metal album as you can find with a 2010 release date on it and is easily my favorite Italian album.

My favorite Italian label was yet another Milan-based enterprise, Senufo Editions, run by Giuseppe Ielsai, an electro-acoustic guitarist who’s been on excellent form in the past few years thanks to recent releases Stunt, Aix and Tools.

Edited, recomposed and mastered to rhythmic perfection, it’s album that you can return to again and again — even if you can’t traditionally stomach these sorts of sine wave sounds — because none of the 15 untitled pieces runs longer than three minutes.

The label had a handful of other releases, some exclusive to vinyl and all of them pressed at an absurdly low number, making them well-nigh impossible to find. Washington State University professor Seth Nehil’s Knives was the label’s first release back in April, a microtonal wonderland of tense strings and skipping beats. Following on its heels was Alessandro Brivio’s album 6pezzi2009+lagodelnulla, a similar aesthetic effort but focused less on microtones and more on loops and loops exemplified by the German group Oval.

The three releases since 15tapes have each taken minimal music in a new direction. Japanese duo Minoru Sato + Asona used a prepared reed organ and glass tubes and vases on One as Two to examine the resonances of the instrument in an improvised setting, producing ambient classical sound. Paris-based Kassel Jaeger drew deep drones from instruments such as the koto, rebab, positive organ, and Coupigny modular synthesizer on aerae. Most recently, Massachusetts-based Jarrod Fowler took noise to a violent extreme on the aggressive Percussion Ensemble.

All of which is to say that the dramatically different approaches to roughly the same idea make Senufo Editions a label to look out for in 2011. With a small but strongly diverse catalog of artists already out, a bright future may lie ahead.