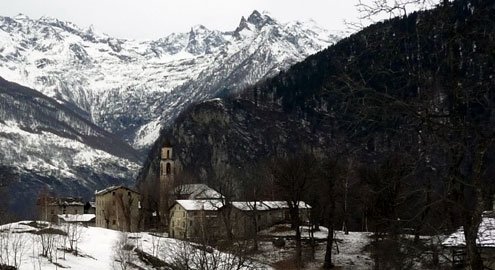 Uschione in December. Photo by Andrea Smith.
A

n overcast sky and dark grey mountain peaks dusted with fresh snow hang over Chiavenna (333-meters), a town of 7,000 inhabitants in Valchiavenna, the most northern point of Lombardy, about 100 kilometers north of Milan.

Chiavenna’s name may derive from the Latin clavis, key – chiave in Italian. The Romans saw the province, which they called Raetia, as an alpine gateway into northern Europe through the Swiss Alps. Not far from Lake Como are the Splügen and Maloja Passes, the first in Valle di San Giacomo, the second in Val Bregaglia, each one carving a way through the daunting mountains. These days, the only Romans are skiers passing through Chiavenna headed for Medesimo and St. Moritz.

Today, I’m hiking with my husband Marino and friends on a circular, 500-meter climb that leads us to the village of Uschione (834-meters). Uninhabited in winter, it is known for three distinct residential clusters that once housed the Pighetti, Nesossi and Zarucchi families. They represent an excellent example of a Longobard contrada, a clan neighborhood.

Behind the train station and in front of the Crotto Ombra restaurant on Corso Pratogiano, arrows point to Sentiero Uschione. A few meters further, red-and-white Club Alpino Italiano (CAI) signs mark a mule trail of wide stone steps to the left.

We immediately enter larch and oak-filled woods. Their faded leaves blanket the ground. We climb to a meadow called Belvedere (450-meters). As its name implies, it offers a view of Chiavenna with the Mera River flowing downstream through the town from Val Bregaglia. Stark mountains surround the valley. The December wind chills. Ascending again, at 600 meters, we find snow. The first this season for us, it brightens the landscape but slows our steps.

Chestnut trees appear in the forest. At times the trail is steep, at others it eases. Bright green moss covers dark granite boulders and green-black serpentine rock lining the snaky path. Once a financial resource for the inhabitants of both Uschione and the valley, the stone is still used for roofing tiles and to make cooking pots in which local culinary specialties are prepared.

Nearby, according to folklore, the orphan hero Pedoscìn escaped and killed two wicked witches who were trying to fatten him up to eat for their supper. So much for Hansel and Gretel.

Further along, we see the low stone walls of once-cultivated terraces. Now overrun with growth, these act as an announcement that we’re nearing Uschione. The woods suddenly open to the first group of houses, the contrada Zarucchi (Zarüch in dialect). The tallest house has an ancient door, which may help explain the name Uschione, which means portone, or portal.

We follow a cobbled path among the old stone houses that leads into a meadow and later the contrada Pighetti (Pighét), which is clustered around the 17th-century church of the Ascensione with its free-standing bell tower. Nearby but separate are a cemetery and war monument. A 1922 bronze sculpture by Costantino Magni commemorates fallen soldiers from both world wars. The surnames Zarucchi, Pighetti and Nesossi abound.

Next, we cross a field to the final contrada, Nesossi (Nèsós). We walk through narrow cobbled lanes, find a protected porch, hunker down and drink warm tea from our thermos.

We then climb an embankment to an icy asphalt road that takes us toward the village of Lotteno (654-meters). Twenty minutes later we reach a flat trail leading to the charming if somewhat dilapidated baite (Alpine cottages) and small, restored Sacred Heart church of Lotteno, which overlooks the Schiesone Valley.

Walking along a dirt track that soon meets the asphalt road, we pause. Pine scents waft through the air. A red fox darts across the road. I wonder if the fox lives in a crotto among the rocks?

Crotti are natural grottos found around Valchiavenna and Lake Como. Inside the temperature is a year-round 8°C. They are used to conserve bresaola, cheeses and wine. Some have been turned into taverns offering local products.

Down the winding road we find a path to our previous trail and return to Chiavenna. After a three-hour trek, we still have time to visit the town. We’ve already seen the Parco delle Marmitte dei Giganti, a protected reserve with smooth, cauldron-shaped rock erosions carved millions of years ago by the eddying currents of glacial water and debris.

We opt for the Collegiata di San Lorenzo, an ancient canonical, collegiate church, serving associated parishes. Near the train station, San Lorenzo’s bell and clock tower (1603) marks the way to Via Picchi. Inside the gate, the church and Romanesque cloisters surround a grassy courtyard. Founded in the fifth century, it became a parish church in 1042 and a basilica in 1098. The octagonal baptistery houses a sculpted stone font (1156) and 18th-century silk embroideries. The nearby Museo del Tesoro di San Lorenzo conserves paintings, eleventh-century music manuscripts and church relics, among them the “Pace di Chiavenna,” a jewel-inlaid Gospel cover considered among the most important examples of medieval silverware in Europe.

Later, we stroll through Chiavenna. The town architecture reinforces its one-time role as a strategic center. It also served as a refuge for Italian religious dissidents, protected by Protestant Swiss influences. Nowadays, it’s a tourist town. Back at the train station, the restrooms are spotless. No wonder the Swiss vacation here.