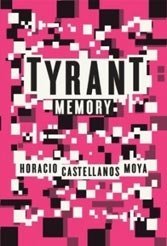 Moya’s novel is set in 1944 and blends historical fiction with scathing bits of noir. The historical part, albeit embroidered, focuses on the last days of the brutal 12-year Salvadoran dictatorship of Gen. General Maximiliano Hernández, an archetypically eccentric pro-Fascist who also embraced the black arts and encouraged the coffee-rich Salvadoran upper middle class to flourish and Europeanize itself so long as it stayed out of his way.

The interlocking narrative opens with the perils of Haydée, the upscale wife of a jailed columnist named Pericles who was general’s personal assistant before embracing communism. Next comes a wild scram by Pericles’ playboy son Clemente and his military buddy and cousin Jimmy after the two are involved in a failed 1944 Easter Week coup. The denouement — which harbors the novel’s grace — occurs nearly 40 years later, in Pericles’ dying twilight.

Moya’s greatest agility is in managing the deadpan, which he already evidenced in the wicked “She-Devil in The Mirror” (2009). Here, Haydée’s sincere concerns about her jailed husband are interspersed with anti-anxiety trips to the beauty salon, favorite foods, and family feuds. On the lam Clemente misses booze and girls. All in all, the anti-Hernández coalition is far removed from the abject peasantry that paid a severe price for challenging various dictatorships.

Still, Moya’s writing has a bittersweet edge. He hates dictators but isn’t foolish enough to discount the existence of opportunists. He believes in change – Hernández was ousted later in 1944 – but hedges his bets on heroism.

Only Pericles, whose vivid, contradictory temperament is portrayed in its twilight, gives the novel a deeply personal sense of legacy. On balance, Moya’s book is a rare and vivid snapshot of an era in Latin American history that is often overlooked by writers eager to get to the tortured Chilean and Argentine 1970s without considering how far back the ugliness goes.