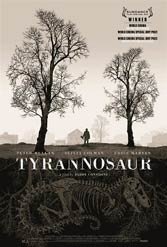 Writer-director Paddy Considine’s stunning first feature is about the way grief and rage come and go contemptuous of individual self-preservation. Peter Mullan is jobless fifty-something Joseph, a drinking, raging bull of a man (“Robert Fucking DeNiro”) in a rainy Midlands village. A widower and self-styled “cunt,” he moves from pub to house, mutters to himself, insults his neighbors, and even kills Buddy, his dog. “I am not a nice human being,” he boasts, believably. His best friend is dying of cancer; his overweight, diabetes-stricken wife died after having her legs amputated. Joseph nicknamed her Tyrannosaur because of the thumping noises her footfalls made when she could still walk.

By chance, or so it seems, Joseph grudgingly befriends the pious local community store clerk, Hannah (Olivia Colman), who tries issuing comfort and forgiveness. His response to Godliness is predictable: “I don’t want anything from that fuck.” But what seems at that point like the story of a mangled man is overturned when Considine suddenly zeros in on Hannah, who underneath her good offices is a battered wife whose embrace of faith is a last-ditch escape mechanism that isn’t working.

Trapped between two violent men, a wild husband and the enigmatic Joseph, she finds shelter with the latter. They are birds of a feather, one wounded and loud, and the other wounded and cowed. But Considine offers no lasting truce, and Hannah’s story offers even more surprises. Nothing about this superb actor’s movie story is linear. Tormented Joseph is a fascinating creation, as is Hannah in response to him. Scotsman Mullan and British TV veteran Colman are good beyond measure in a compassionate story that fakes nothing.