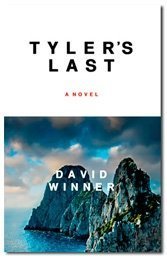 Set in the days preceding the Sept. 11, 2001 terrorist attacks, the novel follows Tyler back to the United States from the Amalfi Coast. He’s had to give up the beloved house he shared with his wife after she ran away with a woman in what can seem like a comedy of misfortune (“My wife has gone to Marrakesh with her little French girlfriend, my car has broken down, and the villa we’ve taken for the summer is right up this hill.”) Soon, Tyler is embroiled in a mission to uncover both the details of his own past as well the past of his first crime’s victim.

Relationship triangles — Tyler’s own marriage and that of the old lady and her devoted caretaker — intersect. The story zips from present to past and back, from European glamour to gritty New York. The tour of sexual variations is just as varied.

In the final chapters, the characters from the book-within-a-book and those of “Tyler’s Last” join in a poignant and hilarious dénouement. The old lady’s name is finally disclosed — Eve — and the fictional cast blurs into the author’s “real life,” eliciting a revelatory dimension.

“Tyler’s Last” is like a great tribute band. At times, it captures what made the first band special, even surpassing it. At others, it illustrates flaws in the original music and lyrics. Over all, the riff is fitting.