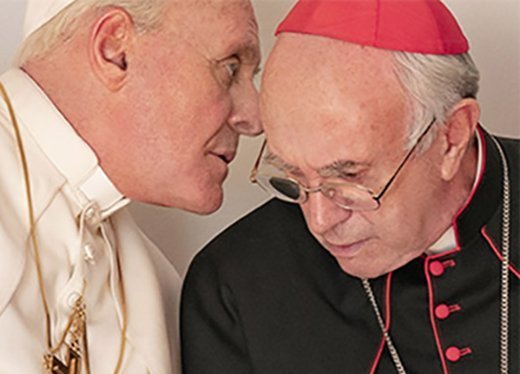 Anthony Hopkins as Pope Benedict, left, and Jonathan Pryce as his eventual successor: a friendship not quite made in heaven.
F

ernando Meirelles’s “The Two Popes” should have been a stage play. In such a play, with Jonathan Pryce as the soon-to-be Pope Francis and Anthony Hopkins as sitting Pope Benedict, the Mexican director could have situated their remarkable acting talents under the light of a single beam. That play would have told of the complex and often brilliantly nuanced relationship between two prelates who on the surface could not be more ideologically different.

Instead, Meirelles’s at times awkward film is a pudding of Vatican politics, the life of Francis (told through flashbacks), and the improbable sequence of events that led him to ascend to the papacy soon after Benedict unexpectedly retired in March 2013, the first such retirement in modern papal history. More a theologian than a pastor, Benedict concluded he wasn’t suited to the world of Twitter and apologizing for sexual scandals, both of which are now papal staples.

When Meirelles hones in on Vatican intrigue, the film, though beautiful to behold, struggles to gain a cohesive foothold. The same holds with the flashbacks, in which the audience is transported to Francis’s (Cardinal Jorge Bergoglio) native Argentina. He is made suitably humble, self-and socially aware, a good natured Jesuit who genuinely believes tending to the dispossessed (and there are many in Buenos Aires) is the Church’s chief mission.

The movie’s adrenaline surges only when these two men (both veteran actors) are made to interact, and collide. The first meeting is in 2005, when Bergoglio asks Pope Benedict (the doctrinaire German Josef Ratzinger) for permission to retire, which is denied, setting the eventual stage for his own papal ascent. But Bergoglio was no babe in arms; he’d finished second in the conclave which elected Ratzinger. 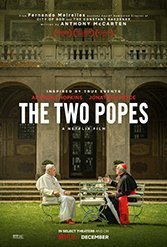 Vatican-themed films are tough to make, as Mexican Fernando Meirelles discovers in “The Two Popes.”

When Pryce and Hopkins are permitted to confront each other over Catholic philosophy, social priorities, and the meaning and purpose of leading the Church (“I disagree with everything you say,” Benedict hisses at one point), the story climbs to intrepid heights. Hopkins’s murmuring, cane-toting Benedict is sly, stubborn, Teutonic, and determined to see the Church as “a house is built of walls, strong walls.” But Pryce’s Jesuit cardinal, though always polite, refuses to stray from a belief that religion is very much about the traits and desires of those who adhere to it, whose voices must carry past all walls. Their strolls through Vatican gardens are a verbal and visual delight (Benedict still lives in modest quarters ensconced in those gardens).

The two can also indulge in low-key levity:

Bergoglio: “Yes, but they were not at the same time.”

Benedict: “I was making a little joke.”

Benedict: “German joke. It doesn’t have to be funny.”

Making movies (and television) that attempt to give us a glimpse into the Vatican’s largely closed realm is no easy task. Rex Harrison, who played Pope Julius II in the 1965 film version of Irving Stone’s novel “The Agony and the Ecstasy,” about the relationship between Julius and Michelangelo (Charlton Heston) during the painting of the Sistine Chapel, seemed at times tongue in cheek. Italian director Paolo Sorrentino’s short-lived TV series, “The Young Pope,” tripped over Vatican (and Italian) caricature (notwithstanding a stellar Jude Law). Only Nanni Moretti’s 2011 “Habemus Papam” with the brilliant Michel Piccoli as a reluctant and panic-attack ridden French pope, seemed somehow to get under the surface in stylishly original terms.

“The Two Popes” rarely charts new ground. Stripped of celluloid flashbacks and pretty Rome footage, the moral weight of the tussle between these two figures begs the kind of relentless theatrical focus that might have made it unforgettable. As is, the film is in gear only when its two leads are stage center.