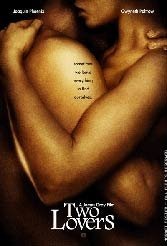 Getting to the ambivalent heart of infatuation is not easy. “True” love or wild sex are simpler. So is courtship. The physical part of love is fairly easy to document on film. What makes James Gray’s romance so credible, which is to say remarkable, is how suggestively and persuasively it presents and reckons with desire’s ripple effects. Few films, in fact, deal so ably with heterosexual love from a male perspective.

There is no mystery to either premise or story. Leonard Kraditor (Joaquin Phoenix) is a psychologically frail man who has retreated into his blue-collar family’s very Jewish Brighton Beach nest in the wake of a failed love affair that nearly killed him — literally. He’s doted upon by his hawk-like mother and encouraged by his gentle dry-cleaner father, who loves Benny Hill reruns. Both want to set him up with Sandra (Vinissa Shaw), the daughter of another, more successful dry cleaner. A union would make good emotional, family and business sense.

One day Leonard stumbles on new neighbor Michelle (Gwyneth Paltrow). She’s beautiful, unstable, old-school ditzy and in the middle of a stormy affair with a successful (and married) Manhattan lawyer. Leonard is smitten at first sight. Michelle wants a confidant; Leonard wants … everything. Meanwhile, Sandra has made her soft adoration clear.

Michelle is a confessed “fuck-up”. Sandra is visibly devoted. Leonard is out of his mind. The clumsy, insinuating dance of this imperfect troika, stitched around finely-drawn Jewish Brooklyn, occupies the rest of the film, with Leonard the avid victim of benign obsession. The more Leonard adores Michelle, the more she slips confusingly sideways. He thinks he can repair her wreckage by possessing the wound. Sandra’s plain feelings only deepen Leonard’s unrequited weakness. He’s a man who’s sure he knows what he wants until he’s forced to adapt, or awaken.

Gray wisely nudges infatuation to the frontiers of ego and opportunism, spilling the contents of many beakers at once. Being crazy about someone is just that: A “somersault into a ring of knives,” as Socrates called it. It’s vain, volatile and changeable. And there you have it: This is a film about changes of heart and the turbulence that comes with it.