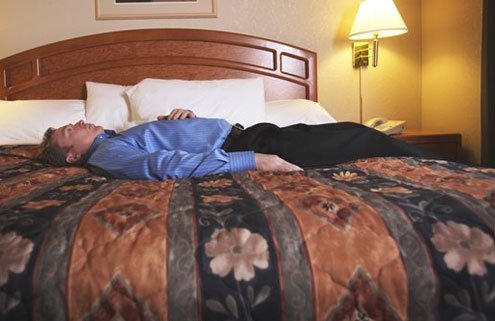 Lesson 1: No cold calls without a meeting first.
G

iving pleasure also means learning lessons. Thinking that clients are all alike or generalizing about male behavior can get you into trouble. So can being desperate for money.

That’s why I created my interview rule. I decided always to screen potential clients over coffee before deciding whether to go any further. Some escorts enter a situation “blind,” since they’re acting on orders from their agency, who put billing first. That’s not my way.

Not surprisingly, my first lesson came when I broke my own rule. I got a call from an Italian man who spoke quickly. He said he couldn’t leave his home, but I didn’t fully understand why. His phone manner seemed pleasant enough and I didn’t have a euro to my name. So I decided — unwisely — to put aside the interview.

We arranged to meet at his place, which was thankfully close to mine. For once, that meant no metro and no buses. A half-hour later I was at the front door of his second-floor apartment.

I felt comfortable enough with my decision — until he opened the door. Standing in front of me was a large, obese man with a toothy grin and a long and shaggy Santa Claus-like beard.

My first thought was, “Run!” Imagining sex with him was unbearable. But I was paralyzed.

“Ciao, piacere,” was all I managed to squeeze out, trying to smile.

But my “client” was over the moon. “Ciao, X. Finalmente! Che piacere! Entra, prego, sentiti a casa tua!” My house is your house!

To my amazement, I actually went in. On the living room table was food, lots of it. My mind was racing. This man was probably six times larger than me. I’d be lucky to come out alive. I needed an excuse short of telling him, “I’m sorry, man, but you’re just too disgusting for me…”

As I was plotting, my client offered me a slice of cake (what else?), which I turned down. Then it hit me. I pretended to panic. Oh my God, I told him, I left my mobile phone in a bar. “Devo tornare a prenderlo. Tornero tra cirque minuti, va bene?” I needed just enough time to get the phone, I promised him.

His cheer was unbreakable. Take all the time you need, he told me. I’ll never know if he figured out what I had in mind. Maybe he did and was just a better actor.

Once out of his apartment, I fled home. He never called me back, which reassured me in a way. I’d learned the first absolute lesson: No blind meetings.

The second rule concerns the laws of attraction.

I arranged to meet a potential client for an interview in a crowded bar. He was in his 40s, a little chubby, a little short, and very bald. He told me his story, which fit a familiar pattern: wife at home, kids; too much work, a need to relax.

Physically, I found him unattractive. He wasn’t Mr. Santa Claus, but I certainly wouldn’t have picked him to date.

After our coffee, we took a walk. A few minutes in, he asked me: “May I kiss you?” I hate when that happens. The point of the interview is to make a deal. Physical contact is like eating supermarket food before reaching the cashier. I politely refused.

A couple of days later, he called to arrange a meeting and I accepted.

As we headed for the hotel, he kept repeating how nervous he was. God, am I beast or what? I felt like telling him the whole point of our meeting was to give him pleasure. Relax!

I realized I needed to seize control of the situation. It sounds funny but I felt like I was making him lose his virginity. He was squirming with embarrassment. I would never have dreamed that a man in his 40s could be so frightened by a young woman more than half his age.

Even though I didn’t feel the slightest physical or emotional attraction to him, I did my best to imagine the good in him. I tried to get him to relax and enjoy. When we were done, he turned to me and said: “That’s what I call good sex!” Great, mission accomplished.

But wait, he wasn’t finished: “The truth is I’m still nervous.”

I’d soon find out why.

He paid me and gave me a lift to my neighborhood. In the car, he began asking and repeating one question. “What do you think of me?”

My guess was that he was asking it to get the same question from me. It really wasn’t a game I wanted to play. I answered as tactfully as possible, disguising my real answer, which would have been: “You’re just an average and totally uninteresting man without any personality who just got tired of the routine and wanted to fuck.”

He did succeed in provoking me to ask the same question. His answer changed the mood. I was attractive, he told me, and sex with me was good, but as a person I was cold.

I’d never heard anything like that about me, from anyone.

I didn’t attach much importance to it at first. I guessed he was seeking revenge for my opinion of him, which probably wasn’t what he’d wanted to hear. Or maybe he sensed my lack of attraction — it’s hard to hide — and was trying even the score.

After leaving his car I felt miserable. I thought about our joyless meeting. Yes, I’d gotten my money, but money isn’t everything. Selling pleasure also means the presence of pleasure, at least on some level. There hadn’t been any that day.

I’d learned my second lesson: No sexual contact with men I found entirely unattractive. There had to be something, either physical or mental, or both. Otherwise I’d just walk away feeling empty and inferior.