Two Kinds of Decay: A Memoir 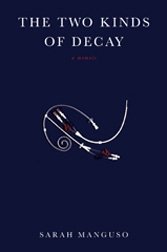 Illness intrigues. It’s morality’s only available sonata. A Margaret Atwood novel that included masectomies thrilled critic John Leonard into hyperbole: “cells riot and meat rots and history itself is diseased.” A kicker for Susan Sontag’s 1978 “Illness as Metaphor” sounded like a movie trailer — “What it is really like to emigrate to the kingdom of the ill and live there.” Joan Didion recently won a Pulitzer for laconically (and often antiseptically) chronicling her husband’s death and her daughter’s fatal illness. Which left Sontag’s son David Rieff to write down his mother’s unhappy resistance to her own disease (“In the valley of sorrow, spread your wings,” Sontag wrote after cancer surgery; she didn’t, couldn’t.)

This rhetorical preamble serves two purposes: first, American poet Sarah Manguso is alive and well; second, her autobiography of decade-long illness — a blood disorder, or “chaos of the blood,” to quote Stephen S. Hall — has (within limits) been remedied.

Manguso’s malady is not metaphor but passport. She’s Dracula in reverse. Blood is drained and purified to keep her alive. Her skin is reshaped to ensure its suppleness. Medicine is the predator’s intermediary.

Manguso got sick in college. To fix bad blood, doctors replaced it. Meanwhile, Manguso — anti-hyperbolic — watched and listened. She took the pulse of catheters and examined her “less-than-nothing state.” Her memoir preaches neither gray grief (Didion) nor high elegance (Sontag). Like Daniel Defoe, who monitored the Plague Year, Manguso concerns herself with the mundanely terrible arithmetic of being ill. Her body’s collapse often talks luridly. Instruments get bad intimacy. But cells do not run riot and meat does not rot. Even if they did, Manguso is not that kind of spokesperson. She’s a UN envoy within her malfunction. As merger of medical back roads and privacy violated, her report to HQ on the toll is lucid, beautiful, and tangibly a matter of hurt.