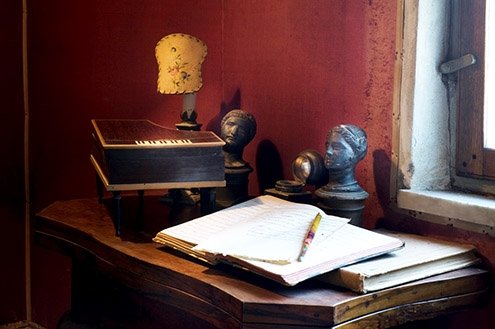 These days, peace and tranquility reign inside the Oddi Palace. Photos by Sandro Bellu.
V

isitors love Umbria for its timeless tranquility. They revel in its quaint medieval towns and the sweeping vistas from cobblestones streets. They soak in the mystical atmosphere of quiet alleyways as dreamy sunsets produce a kaleidoscope of colors.

We modern Umbrian folks are a peaceful people. A Sunday lunch of homemade tagliatelle and roast is enough to keep us content. Yet too few people know about our fierce legacy.

Once upon a time in the streets of Perugia men “played” Sassaiola, a medieval ludus battaglia, or war game. As part of a March festival, men of all ages representing the city’s competing neighborhoods did battle using stones, with the two sides maiming their adversaries to advance on a pre-assigned battle grid. The warriors wore armor and the battleground was mapped out to keep homes and spectators safe.

Violence was a constant through most of Umbria’s medieval and Renaissance years, with family battles at the center of it all. Perugia was the setting for one of the longest and bloodiest family feuds in pre-Italian history, between the Baglioni, mostly rough and tumble local folk, and the aristocratic Ghibellines and Oddis, who were closer to the papacy and the city’s ruling Guelph party.

Inter-marriage briefly quelled the dispute, but the families clashed again and more bitterly at the end of the 15th-century culminating in a Baglioni victory in 1488. The vengeful Baglionis banished the Oddis, seizing their possessions, which included many large feudal estates.

Only thanks to papal intervention half-a-century later (several Oddis became pope) was Baglioni power gradually diminished, allowing the Oddi to return from exile, recover their land, and begin to prosper again. But the wars cost thousands of dead.

The historic center of Perugia still features the proud Oddi palace, the ancestral home of the Oddi dynasty.

Beyond the exquisite but sober façade there seems hardly any trace of the hostilities that raged for centuries. The years have transformed the palazzo. The last member of the main branch of the family, Marquise Maria Vittoria, died in 1942. Its final owner and resident, Maria Vittoria’s granddaughter Barbara Marini Clarelli, died in 2007. She insisted the palace remain open to the public as a living testimony to Umbrian history. Though known for her elegance and art restoration skills, she was also fine cook. I was once told she used ancient local recipes to make meals for her companion, art historian Francesco Santi.

After centuries of combat and bloodshed — few are fully aware of just how violent Italy’s long history is — I find it comforting to think that what’s been handed down is art, books, and a splendid palazzo open to those with a love not only of Umbria, but of Italy and its past.

— Cook the pasta in plenty salted boiling water, according to package instructions.