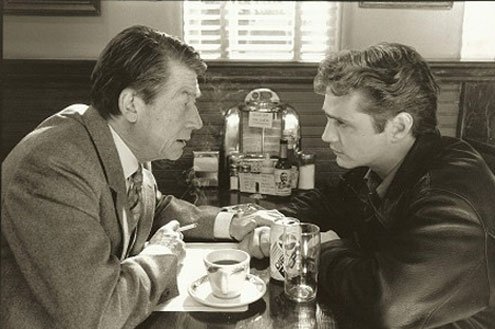 Richard Kwietniowski got the best out of Hurt and Priestly.
R

iddle us this: How do you put John Hurt — the patrician version — and Jason Priestly — the one-time 90210 hunk — in the same movie? And once in that movie, how do you funnel them toward their hidden strengths, in Hurt’s case lightly-pebbled irony; in Priestly’s a kind of genuine doe-eyed naiveté?

Londoner Richard Kwietniowski solved the puzzle in 1997, when he blended old-school homosexuality, a believable loathing of the modern, and the faux-modern 1990s and came up with this arresting little work that stands in its own quirky class.

Meet writer and critic Giles De’Ath (Hurt), a London widower who lives in a locked down London flat attended to only by a middle-aged housekeeper, whom he regards formally. He’s prim, aloof, laconic, unhappy with telephones, a one-man 19th century buried in an otherwise modern city. On a rainy London day, De’Ath reluctantly takes refuge in a West End cinema. He thinks he’s picked out a movie based on an E.M. Forster novel. Instead, he gets “Hot Pants College II,” a Cancun-style spring break romp featuring boys and their would-be toys. “This isn’t E.M. Forster,” he hisses. De’Ath, whose revulsion is practiced if not professional, gets up to leave when he’s struck down by a Maid Marian moment — a close up of Ronnie Bostock (Priestly), one of the Hot Pants boys.

Kwietniowski sense of rapture, and Hurt’s, is sublime: it’s love at first sight. Shocked by his passion, De’Ath dissembles but fails. Then, he buys a VCR to watch Bostock’s previous films, including (it had to be) “Tex Mex” and “Skidmarks.” Though there’s cliché in having an old fogy meet a mocking video store owner — think American teenager asking a 1950s druggist for condoms — Kwietniowski lets Hurt call the shots. He underplays and probes, ignoring the hazing, like a boy on a romp. He pitches out the housekeeper to watch the videos alone. He buys teen magazines to learn more about Bostock’s likes – they include Axel Rose and Stephen King.

Inevitably, De’Ath flies to New York and treks to Long Island (Kwietniowski could only afford Halifax, but it doesn’t hurt the visuals) in search of his new idol’s holiday home.

This is a movie (from a novel by British critic Gilbert Adair) about homosexual passion that doesn’t need to swing a heavy bat. Da’Ath’s lust is sexual, that’s evident, but the orientation is secondary to the pressure. Kwietniowski’s genius lies in letting Hurt dictate the action. Da’Ath meets Bostock, who regards him innocently at first. Not so Bostock’s girlfriend Audrey (Fiona Loewi), who’s wise to sexual undercurrents. Audrey and Da’Ath dance around one another like savvy predators.

The movie succeeds because its basic ambition is universal: to level the human playing field. Da’Ath is a remote and aloof figure, until he falls in love. Bostock is just a B-grade actor who can’t understand the fuss, until he’s introduced to the incomprehensible strangeness of his visitor. Early on, Da’Ath, taking a swipe at computers, says, “I’m a writer — I don’t process words.” Here’s an exquisite little fable about words, wants, and misunderstandings.

About the same time of the 1990s, Bill Condon took Kwietniowski’s Long Island theme a step further, producing “Gods and Monsters,” a fictional biography of the director James Whale with Ian McKellen on par with Hurt. Whale, who directed “Frankenstein,” “Bride of Frankenstein,” and “The Invisible Man,” was known as a professional eccentric at a time when eccentricity meant homosexuality. After his early horror success, Whale’s career gradually fell apart.

Condon sets his film in 1957, in Whale’s full-blown Hollywood twilight. He’s suffered a stroke and lives alone, tended to by his maid Hanna (Lynne Redgrave). The appearance of former Marine Clayton Boone (Brendan Fraser), a buff gardener, sends World War I veteran Whale into a lusting abyss of excitement and despairing remembrance. Boone triggers a flood of endorphins that make the alcoholic Whale all the more inclined to resist his impending mortality.

Given the task of inhabiting torment, no one is better than the spooked McKellen. He rages and cajoles, woos and bickers, begs and weeps, all in a queen bee effort to get Boone to model for him. “This is my gardener Clayton Boone,” he tells Princess Margaret at a cocktail party. “He’s never met a princess before, only queens.”

It’ll all end badly, that’s apparent from the start, but the gloaming doesn’t stop Condon (who would direct “Kinsey” in 2004) from dredging up Whale’s loud muck. Unlike, “Love and Death,” the movie makes no effort to balance wit and melancholy, making all humor darker than the darkest night. Fraser, while physically adroit, is mostly wooden. Still, Hurt and McKellen at their best is a rare treat, particularly since both have since been relegated to wizard/hero roles.