Twilight of the Eastern Gods 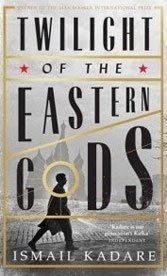 By Ismail Kadare, translated from the French by David Bellos

Toward the end of Albanian novelist Ismail Kadare’s recreation of his student year in Moscow, as a kind of comic exclamation point following Boris Pasternak’s awarding of the Nobel Prize and the Communist hysterics that ensued, comes the sardonic line: “Once upon a time there used to be a giant state called the Soviet Union.” Once upon a time indeed, since the pompous and comically self-involved literary world Kadare describes — 1958 spent in a Moscow writer’s dormitory (the Maxim Gorky Literary Institute) — often tilts toward adolescent farce.

But Kadare’s shrewd lampooning requires context. Albania’s edgy relationship with Moscow (soon to dissolve) gave Kadare greater latitude to travel, publish and write — so long as he stuck to elliptical satire that insulted while not protesting too much. This Cheshire grin memoir, released in Moscow-loathing Albania of 1978, shows Kadare at his subversive best, caricaturing his writer-student colleagues to make heavier fun of the faux-literary culture to which they kowtowed (“The stunted Gods of the Soviet camp!”)

His work is bitter lemon-style civil disobedience at odds with the cinderblock resistance put up by the likes of Vaclav Havel or Aleksandr Solzhenitsyn, both imprisoned. Kadare, uninterested in jail time, instead formulated a gently scornful approach that allowed him to poke fun at Nikita Khrushchev, whom Albanian leader Enver Hoxha, a diehard Stalinist, disliked, while also making light of local girl-crazy shenanigans (as Moscow-Tirana relations cool, Albanian students are summoned to their embassy and told not to date Russian girls, lest they impregnate one).

As a study in Soviet-era mores and thinking, this is a vital bit of memory that frames Communist bluster as just that. Published in French as “La Commission des fêtes” in 1981, including the sexual adventures excised from the Albanian version.