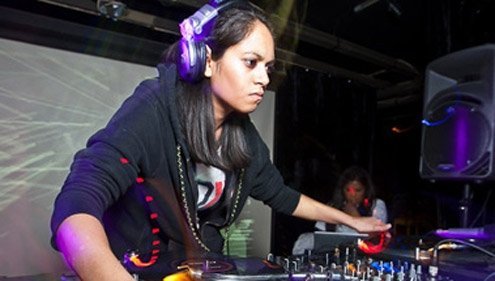 Sara Abdel-Hamid, a.k.a. Ikonika.
I

t’s enjoyable hearing an artist I’d once dismissed follow up a disappointing release with one that pleasantly surprises me.

Two examples of that this month: The first is the full-length return of Sara Abdel-Hamid, a.k.a. Ikonika, on Aerotropolis (Hyperdub). As one of only a handful of high-profile female DJs who have managed to infiltrate the dubstep world, Ikonika’s biography wrote itself. She first came to prominence with the 2008 single “Please,” but it was her 2010 debut LP Contact, Want, Love, Have that expanded on a strong first-generation videogame influence in her music. To me, it felt like the opposite of what dubstep was supposed to be: shallow and meaningless.

Aerotropolis, on the other hand, doesn’t suffer from that sort of burden of proof. In part, that’s because Ikonika is more willing to move out of the 8-bit comfort zone she leaned on so heavily three years ago. A song like “Eternal Mode” still carries the marker of a Nintendo console soundtrack classic, but there are also beatless tracks like “Completion V.3” and house jams like “Beach Mode (Keep it Simple)” that show a strong connection to gaming soundtracks of the 1990s. In that respect, there’s a uniform thread to the music, but without on tiring trick tried over and over. There are more notes and loops at work here.

The more enlightening aspect of Aerotropolis, however, is that it no longer makes sense to frame in terms of dubstep. Ikonika doesn’t sound like she’s trying to fit in with DMZ castaways; instead, her sonic contemporaries are now James Ferraro and The Host.

This sound suits her better. While Ikonika’s appreciation for gaming is still at the forefront of all he songs, her palette has expanded to include a wider range of influence and the music achieves previously unclaimed depth. It’s no longer mindless chintz.

My second example is less extreme but no less satisfying. I’ve mentioned El-P and Killer Mike here before, but their new self-titled free download as Run the Jewels (Fool’s Gold) is an ideal coupling of two rappers at late-career high points.

Last year’s 1-2 punch of El-P produced solo records, his own Cancer for Cure and Killer Mike’s R.A.P. Music, were excellent demonstrations of a sonic blueprint. It was Mike’s record I had the problem with: To these ears, his Atlanta drawl didn’t mesh with El-P’s bludgeoning New York beats. The best tracks were slower or had El guesting to add that touch of familiarity.

It turns out that all Killer Mike needed was more time with El-P to realize their collaboration’s full potential. That’s what Run the Jewels is: 33 minutes and 10 songs of two guys rapping for their lives in a way that balances both the serious and humorous. It’s embarrassing that something this good was released free and with relatively little PR fanfare.

There’s no doubt about that. Killer Mike’s visceral immediacy has rubbed off on El-P in songs like “Job Well Done” while Mike settles into more cerebral stretches reminiscent of El on songs like “No Come Down.” He also sounds comfortable on these beats — though they still have El-P’s requisite white noise touches, the BPM is just a touch slower than they were on R.A.P. Music and it’s noticeably better.

Whether they’re trash-talking the current state of hip-hop, the government, each other, or you the listener, El-P and Killer Mike are sharper now than they’ve ever been.

The real pleasure is hearing them bring out the other’s strengths in real time. Run the Jewels is the sound of two friends adamantly showing off their commitment both to hip-hop and each other, something worth returning to.