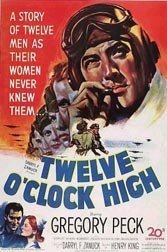 A war movie knee deep in nuts and bolts should not be beautiful. This one is. Director Frank King’s unsentimental account of early Allied bombing raids over France and Germany is a study in frailty and nobility, a delicate task around B-17s. Gregory Peck is Brigadier Gen. Frank Savage, a former pilot called back to take over his bomber wing after its commander (and friend) refuses to treat his aviators “as a set of numbers.” It’s 1942 and American air power is as yet unproven.

Savage is of course Savage: No drinking, “maximum performance,” give no quarter. He is so demanding that his pilots want out from the get-go. But Peck’s Savage is a grim American hero who doesn’t know quit and whose decent resolve is gradually propped up by former skeptics, including his aide Major Stovall (the understated and exceptional Dean Jagger). What matters most about all this isn’t combat (though the aerial sequences are remarkable), but King’s attention to male spirit, its weaknesses, foibles, pride, and literal sense of mission. “Guinea pig” pilots who once had the mumps or committed suicide (a much-unreported wartime reality) eventually go to bat for Savage because his discipline seems to stand for something other than show-offy egoism.

Throughout, the film is a tribute to a generation of now-forgotten America teenagers who flew into enemy territory knowing they were likely to die. In all, nearly 90,000 U.S. airmen, most between 18 and 23, died in World War II. Even the demanding Savage ultimately breaks down, an intelligent tribute the awful egalitarianism of war. If you see to understand men — albeit an idealized version of their more stalwart aspect — see this. Sure, heroically digitalized “Knights of the Round Table” reenactments are intriguing, but this story hews more closely to the life and time of real people and accessible sacrifices. “We’re in a shooting war,” Savage tells his charges early on. “We’ve got to fight.” To stay sane, they should “consider themselves dead.”

Peck is stalwart as a man consumed by the psychological pressures of the very war he tells his kids to fight. His non-superhero presence is a tonic for the thinking soul.