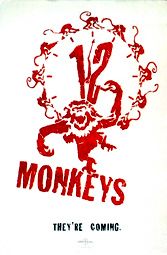 There’s no stopping Terry Gilliam when he’s on his game. He’s a kid in a candy store of wild mischief. Here, time travel and disease get a satirical jump on reality. James Cole (Bruce Willis) is a futuristic convict sent back to the 20th century to stop a mankind-exterminating plague (Superman would disapprove). But the moronic futurists get it wrong and Cole is dispatched first to a mental institution and then into rational hands, a shrink named Kathryn Railly (Madeline Stowe). The plot gets thick and wondrous with the addition of Jeffrey Goines (Brad Pitt), the mad-hatter son of a biologist who is experimenting (you guessed it) with virus strains. Willis is at his best (a great anti-hero) and Pitt, asked to be adolescent, is delightful. This movie is as charming as it is ominous, a combination only Gilliam can pull off with gusto. Haunting accordion score by Paul Buckmaster.