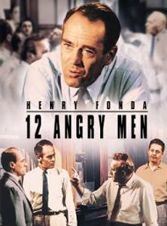 Inspiring examination of human character and the meaning of law that’s been copied for decades: Twelve jurors in a drab room, all men, eleven convinced of a verdict but the twelfth in doubt. In many respects, Sidney Lumet’s work is American theatrical filmmaking’s last mainstream hurrah. A Hispanic youth accused of killing his father faces the death penalty and every juror but No. 8, Mr. Jones (Henry Fonda), immediately judges him guilty. But the gentle Mr. Jones is skeptical. Gradually, he persuades the others — most weary and eager to go home — to consider the prosecution’s loopholes. They loathe the task because it demands abandoning the anonymity of unanimity and opening their views to scrutiny.

Lumet gets the best of Fonda’s unparalleled empathy, which is rooted in a quiet rationalism no longer associated with the United States. The cast is old-school awesome, including Lee J. Cobb. E.G. Marshall, Marty Balsam, and Jack Klugman. The 12 men are archetypal: accountant, stockbroker, self-made businessman, immigrant, and so on. What is reasonable doubt? When is truth racial bigotry in disguise? The questions taken up in the sweltering room outline modern civics. “It’s always difficult to keep personal prejudice out of a thing like this,” says Mr. Jones. “And wherever you run into it, prejudice always obscures the truth.”

This is entertainment that demands public intellect and discernment. It’s also the moral forerunner to all courtroom drama.