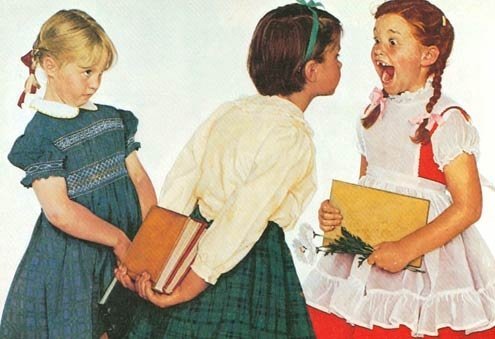 ext summer won’t be stellar as this one. Impossible. And there’s simple reason why: My children and me won’t be surrounded by a gaggle of 11-year-old girls.

There is no single living planetary force more able to assist an exasperated mother of preschoolers than the just-under-12 female set. Sure a 10-year-old is accessible. And the 12-year-old can be useful. But the 11-year-old… she’s queen of the tweens.

The 11-year-old girl is old enough to have common sense and miniature maternal skills but young enough to be carefree and play like a kid. She might wear a sling shot-like brassiere to support her breast buds but her hormone levels are still stable enough that she’s not only happy to help but she also gets a great sense of satisfaction out of it.

One 11-year-old is worth her weight in gold. Four of them… and you, my mother friend, have hit the mother lottery.

I’ve never considered myself lucky. But this summer prepubescent fortune rained down on me like an Asian monsoon. And like their Asian counterparts, my foursome of helpers worked way too many hours and their wages were definitely below scale (though I don’t think Chinese factory bosses take their employees on shopping sprees to Claire’s Accessories or run them to the local Ice cream joint after their shifts). There are no doubt labor laws that protect against the number of hours my 11-year-olds put in. But these girls now have a vast collection of sparkly barrettes and they were also able to consume mass amounts of mint chocolate chip milkshakes.

While my surly 13-year-old niece brooded over her computer, my summertime 11-year-old work force would take the initiative and ask:

“Can we watch your kids?” This is rhetorical, right?

“Can we play with the boys in the pool or should we take them for a walk?” Who is on vacation for the first time in 5 years? Hollah!

“Can we try putting them to bed?” Was I just hit by a truck? Or have I died and gone to heaven?

This was life with four 11-year-old females. They were sprier than any grandmother and more efficient than a husband: there is nothing more sublime.

I’ve had my issues with childcare providers in the past. I had a nanny from Nigeria who ate me out of house and home. I had an au pair from Alabama who clocked in way too much time on social media.

But I admit these were my failures. I’m bad with boundaries. I told my domestic workers they could eat whatever they want and gave them my Wifi password thinking they would be earnest enough and have enough work ethic to still hustle for the kids. I was wrong. One put steaks in her bag daily — though she always asked permission. The other didn’t socialize with my kids… but maybe she would have if they’d had Facebook accounts. These arrangements were never bad, but still, they were not quite right. This was my fault. I was a bad employer.

Now I run a much better sweatshop. My summer staff worked of its own volition and under good conditions (sometimes we even went to the Go Kart track). It was the perfect arrangement for all considered. Me, my boys and my girls had such fun. We made memories that we’ll all look back on fondly (or so I believe, because I’m either suffering from acute jet lag or early onset of Alzheimers).

One thing’s for sure: there will never be another summer like this one, especially since next year my sweet Adeline, Josephine, Greta and Lily will all turn 12.