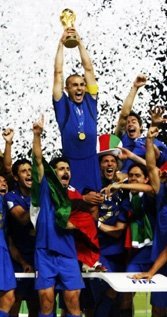 hat a difference 24 years makes — at once all and none. On July 10, 1982 I sauntered to my local kiosk owner, Mr. Giovanni, and asked him to put aside a copy of La Gazzetta dello Sport in the unlikely event (pessimism my mantra) that Italy won its World Cup final match against West Germany.

Italy did win, 3-1, in Madrid, and Mr. Giovanni promptly handed over the paper, whose front page I later framed. It now hangs prominently in my apartment.

I watched the France final in the same room as the July 1982 game, though on a different side — the apartment was remodeled in 1989 — and without my fan of choice: my mother. She died in 1988. Shadings of superstition and sentimental respect dictated that the two watchings resemble one another — small tribute on a joyously tempestuous night.

It wasn’t the first championship match I followed in famiglia (among family, and there was much such unity on Sunday). I saw the 1970 final, in Mexico City, with my father and the Italian writer Ignazio Silone. Not much of a soccer fan, Silone preferred to revel in coming uprisings. “If they win,” he declared, “100 dead! And that’s just in Rome. Una follia!”

Italy didn’t win, beaten by Pele’s Brazil 4-1, no doubt pleasing Silone and forcing the sullen retraction of tens of thousands of flags draped from apartment windows. There was more of that in 1970 and 1982; Rome dressed up in tricolori those July summers. Perhaps the further you drift from fields of battle — and the more others enter unwarranted frays — the greater the compications of flag management (what else to call it?)

The Gazzetta that Mr. Giovanni sold me was singularly elegant, a tall hecter of black and white ink on pink paper with the stately headline “Campioni del mondo”. Two deeply grainy photographs, of Dino Zoff, the goalkeeper (he would later coach Italy), and manager Enzo Bearzot, centered the page. Shockingly, advertising had begun making an appearance on front pages and a jeans company promotion camped out like a panther at rest across the foot of the cover. It seemed ready to leap up and take over the entire page if only it could. In some cases it has.

The editorial was titled “Bearzot come Pozzo,” a tribute to Vittorio Pozzo, the last Italian coach to win a World Cup, in Fascist Italy of 1936. The rest of the space was dedicated to headlines and kickers and the stubborn detritus that crowds a front page. Each sentence began with incredulity: we are world champions. Most articles rightly made mention of Italy’s accomplishment in blunt soccer terms: the unheralded team had defeated reigning champion Argentina, ousted favored Brazil, and knocked down tough Germany in regulation time — Italy led 3-0 before conceding a meaningless goal. The Italians even missed a penalty kick with the score 0-0.

This year’s run, while a little less spectacular, was no less hard, no less impressive.

But my Gazzetta ritual changed. Mr. Giovanni’s kiosk, for starters, is managed by a woman. Foolishly, I hadn’t asked her to set aside a copy. By the time I arrived she shook her head from side-to-side emphatically: niente. All sold out. Unlike 1982, I had alternatives: the Internet. Though Italy is woefully behind in web usage as it concerns business and email, Gazzetta is fully online. All its features are available, some at cost; it uses the same traditional pink online as in print.

Strange, though, to read of this championship on a computer screen. At times, leaping into the future has the reluctance of a limp. You wish that sacrifices to progress didn’t leave so much else of substance behind, but sometimes they do.

In 1982, Italy had an snide and owlish side, slightly depressed, unfriendly to irony, wedded to a serious kind of sensationalism in sports. No one made front page puns. Newspapers did not “chat” with readers. Instead, they dwelled in another dimension, something like, “me, journalist,” “you, mere man.” Aspects of the theatrical pomposity — rooted in class and educated privilege — endure two decades later. Newspapers still cruise through rarified air, at times making up their identity to satisfy political and business interests. The aloofness, however, is mostly gone.

The chat factor has replaced it, not necessarily a bad thing. Gazzetta’s victory headline was: TUTTO VERO! CAMPIONI DEL MONDO.

That’s a “if you can’t believe your eyes, open them now” headline. It’s sincere and slightly comic. It’s one way of saying “incredible.”

The mores of 1982 (dominated by the formal form, “Lei”) wouldn’t have vetoed such casualness as too idiomatic, too discursive, too “a tu per tu” with the readership. Then again, Italy also won convincingly in ’82. Penalty kicks are a cardiac risk, and, if all goes well, release from a pained scare. You can let your guard down a little.

Gazzetta is in full color now (like The New York Times.) In the “winning” edition, the Italian national colors frolic in the lettering. A resolved shot of Fabio Cannavaro replaces that of Zoff, holding aloft the trophy in perfect Technicolor. Cannavaro, the captain, is flanked by two large quarter-page color ads, one for Alitalia, another for male beauty care products “for the man who never has to ask.” Alitalia is nearly bankrupt and some Italian men still like to smell good, and will pay to ensure it. No news there.

The editorial, predictably, is titled “Lippi come Bearzot,” hyping a continuum that now requires only the insertion of the name of the next winning coach in an editorial that would read “X come Lippi,” and so on. The front page even reproduces the 1982 cover in miniature. Gazzetta, like most of the Italian print press, is down on its cash flow luck and peddles memorable front pages from its “Gazzetta Store.” Total hawking — the peddling of everything — is a global phenomena pioneered by the United States. Italy has started tasting and embellishing it to suit its own eBay-style needs. Makes sense, and perhaps a few euro.

Once or twice a year I see Mr. Giovanni on the local boulevard. He’s in his 80s. He walks carefully but with spring. “The world has changed too much for me,” he said one day two years ago when we met by chance in front of a new-age restaurant with bamboo shoots emanating from the foyer. But, he added, “Sempre bella, Roma…”

Indeed it is. Different but bella. Sunday night into Monday air horns brayed. Vespa days returned, “Roman Holiday”-style, flags akimbo. Piazzas and Roman acres pulped themselves in people and — when it ended — cut them loose as cheering throngs. Nice noise to live through from time to time. Italy, like many nations on the planet, requires a loosening of valves. A sfogo is what they call it here, “outsurge,” alliteratively evocative. Afterwards, all feel a bit healthier.

Once upon a time, in my dark ages, it was just Campioni del mondo in black and white.

Now, aimed at a more disbelieving, distracted public, one that trades fast in tommy-gun text messages, the tune was “hey, I kid you not, really and truly…” — TUTTO VERO!

Thankfully, both black and white and color communiqués carry the same message, and for once it is not political.