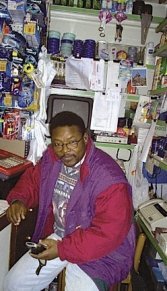 he truism goes that you never really appreciate anything in life until you’re about to part with it: hence, my relationship with my neighborhood, Rome’s Piazza Vittorio, Italy’s immigrant neighborhood, what Italians often call “the Chinese neighborhood.”

A couple of months ago, I started fidgeting in my lovely perch on the piazza for one reason: I have a bricked-over bedroom window. Although it was never a room with a view, when I signed the contract on June 1, the window was intact, allowing for air circulation as well as a tiny bit of light to filter through. Ten days later — my first night in the apartment — I discovered that bricks had been cobbled together outside, sealing me in like an inmate.

Was it personal? I thought back to the mysterious silence that accompanied my accidental intrusion on a condominio meeting as I moved in. But that would have been too easy an answer for what is instead a messy legal battle. I was simply in the wrong place at the wrong time.

I recently found a room, this time with a view: overlooking the Arch of Janus and a church the owners told me celebrates the most weddings in Rome. A sweet change, I thought. As I climbed to the apartment rooftop with its Polish caretaker, I felt sure that I was about to see the panorama that would seal my decision. It was indeed lovely on one side, with tiny churches stitched around the Forum and stately gardens sewn in between. On the other, however, was something I didn’t expect: a dreary freeze-frame of Rome. The FAO was a cement chunk plunked down on a grassy field, and across the street was a comune building that looked like something out of a ghost town.

It was then that I realized the full weight of the word emigrare.

“Surreal,” I whispered to the Polish woman, who smiled sweetly. I wondered if she was feeling as spaesata as I was. Perhaps not — it was the week the European Constitution was signed just below us, and the Poles are, after all, European. I am an extracomunitaria, I thought, perhaps best off with the other extracomunitari.

The word emigrare kept running through my head that day as I realized that to move within Rome, essentially a disparate patchwork of neighborhoods, is truly to emigrate. From that moment on, all the colors of Piazza Vittorio started to reveal themselves: My first step back into my own Rome was the Greenmarket Place, my favorite grocery store resembling a stuffed, dime-store-sized supermarket. The Nigerian grocer, Okey Obijiaku, who is from Lagos, wore a blue baseball cap with the signature ring of gold stars and the words, “Roma Ottobre 29, 2004.”

“The signing of the EU Constitution?” I asked him. “I don’t know. My son was given it,” he said. When I asked him how long he’d lived in Rome, he smiled and said. “Oh, I’m embarrassed to say.” Alas, twenty-two years.

An Asian teenager who works there, a friend of the owner’s son, piped up: “Yes. That’s what it is,” he said. He smiled as he greeted me enthusiastically when I left the store. The future of Europe, I thought. The neighborhood is a microcosm of where Italy is headed: According to UN estimates, in 50 years, without immigrants, Italy’s population would be halved. You hear Arabic, Serbo-Croat, and Chinese spoken around the piazza, and most shops are Chinese-owned. The covered market has the city’s best variety of rice, spice and imported vegetables, and around its edges, vendors draw crowds with posters of Mecca.

Piazza Vittorio is a paradox of places that spawns energy: The village and big city unite here, as do the cosmopolitan and provincial, the diverse, and unabashedly Italian and Roman.

My own palazzo is filled with this energy: Next door is a Filippino family of three; upstairs is an Eritrean woman who, when I once asked to borrow a bottle opener, cowered behind the door to hide the taped up, cardboard covered suitcases bundled in the foyer (evidently an import-export business). Then there are the Italian student artists, the Teatro dell’Opera mime, and my porter Yolanda. We share the view of the Madonelle aglow on the wall. Yolanda had me spell out my name twice when she met me: “Tutti ‘sti nomi stranieri,” she said. Underneath her feigned annoyance, I sensed a fair measure of curiosity, and more important for Italy’s future, pleasure.