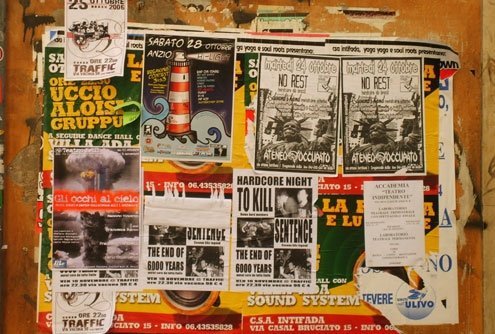 Remember those quaint, romantic streets you read about?
W

orking in the tourism industry in Rome takes guts, thick skin, and a lot of patience. Especially since your primary goal is to make the client happy. Having worked in it several years I can safely say I’ve seen tutti i colori, the Italian phrase for a little bit of everything. Unfortunately, I’ve also endured some not-so-nice situations.

I try hard to mentally prepare travelers for what to expect when they get here, a kind of “Rome 101” that covers accommodations, travel and lifestyle. I tell them that spaces are often quaint, which is a nice way of saying small. Too small at times. I emphasize that elevators aren’t always the norm, particularly if you decide to stay in a “romantic” 19th-century palazzo. The center of the city is crowded with walk-ups and Rome in general lacks North American-style open spaces. It’s a crowded and concentrated city.

Naturally, I always try to put a positive spin on things. Take the stairs. The walk up will help you burn off all of the carbs you ate at lunch, right?

But in the end the message is always the same. Whatever you may have read about or fantasized over the years, things in Italy are well… different. Suck it up.

Still, no matter how hard I try, there’s always a few visitors who slip through the cracks. The ones who won’t or don’t get it. Those who didn’t listen and are suddenly hit by a Rome reality that doesn’t conform to whatever they had in mind.

One American couple with a small child — let’s call them the Smith family — swore on their lives they wanted to stay near Piazza Navona. “We want to be in the heart of it all. We want to be in Campo de’ Fiori.”

I started to email them back with the honest, 21st-century truth, namely: “Are you nuts? All you’ll be in the heart of is one big pub crawl, with late night revelers serenading you outside your window every night.”

But I regained my composure. I strongly advised them against Campo de’ Fiori as it gets a bit rowdy at night and suggested that since they had a small child it might be nice to stay someplace a bit quieter, such as the Vatican area, Prati or even (and I tread on thin ice when I say this) certain parts of Trastevere.

They wouldn’t budge. Instead they settled on being closer to Piazza Navona than to Campo de’ Fiori, which is a little better but can still get noisy depending on the location of the apartment and its closeness to one of the popular bars scattered through the popular area.

Fast-forward to the Smith family arrival. Mrs. Smith nearly had a coronary when she saw that her five pieces of luggage wouldn’t fit into the teeny tiny elevator. Guess who turned into a butler? No tip either, sadly.

The shower (Italy’s famous doccia “box”) also scared her. Americans used to ample shower spaces (and tubs) are in for a surprise in Rome, where apartment showers are often the size of a kitchen cabinet, particularly in city center rentals (we won’t even get started with limited water pressure on upper floors.)

Needless to say Mrs. Smith drove her husband nuts through the entire vacation, and I heard about it. She said she felt “unsafe” in her fabulous Piazza Navona location. Plus, she hadn’t gotten a good night’s sleep since she got to Rome.

I admit it. I was tempted to tell her “I told you so,” but I quickly remembered the service industry mantra: The customer is always right. Maybe she had a right to be afraid. After all, the Smith family rental was so close to Bernini’s Four Rivers fountain she might fall in and drown. Anyway, I finally shipped her off to the Hilton where she could find relief in the comforts of home and get the “People” magazines she needed (her request) to make it through a tough time. Sniff sniff.

I once had a student’s father write to me with an attorney-at-law letterhead to tell me he was very concerned because his son was living in an apartment with graffiti on the building located in a dark alleyway.

Um, yeah, that would be that charming picturesque Trastevere, the one with all of the romantic winding alleyways that guidebooks rave about (Rick Steves: “Laundry and potted gardens seem to float decoratively, as if sketched by Chagall…”). And as for graffiti, the word has Latin roots and the Roman Empire helped invent it.

Oh yes, and the nice attorney also wanted to sue me for putting his son in harm’s way. A classic. I couldn’t bit my tongue on that one. I told him a civil suit would take years, if not decades, to make it to court. End of suit threat.

But my absolute favorite complaint came from a woman who was very upset that her accommodation lacked a properly functioning Internet connection. As a result, she couldn’t keep in daily (hourly?) touch with her friends and family back home on Facebook. A ruined vacation!

Um, I’m sorry. Plenty of buildings in ancient Rome still are poorly connected if they’re connected at all, never mind wireless. Oh, and by the way, you’re in one of the most beautiful cities in the world, with the Coliseum and Pantheon at your fingertips, and you’re worrying about Facebook?

The next day I managed to get her online and, never mind Rome, she was slaphappy. Word has it she never left her apartment. A grand spent on airfare to make sure you stay connected to Facebook.

As Shakespeare once wrote, “Whatever.”