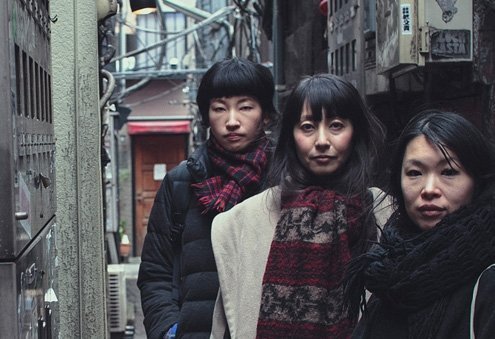 Nisennenmondai is a long-running all-ladies trio from Tokyo whose evolution from noise-rock amateurs to krautrock queens has taken years to play out. Formed in 1999, the band attracted attention outside of its home country in 2008 with the re-release of two early EPs on Norwegian imprint Smalltown Supersound. The label’s repackaging effort Neiji / Tori was an eye-opening high-wire balancing act of noisy post-punk power and krautrock repetition.

But despite all the guitar noise, rhythm was always at the core of what Nisennenmondai did. With #N/A (On-U Sound), the shape of that core — Sayaka Himeno’s drumming — becomes obvious. The band has boiled away excess noise to show what makes it tick.

That’s not to say Yuri Zaikawa’s bass or Masako Takada’s six-string are neglected. In fact, the biggest attractions to listeners unfamiliar with the band will be On-U Sound proprietor and noted dub producer Adrian Sherwood (hence #N/A, Nisennenmondai with Adrian). Bringing Zaikawa’s spare bass notes to the fore and lending the faintest reverb to Takada’s textures suggests Sherwood was more than just consulted for his studio time.

But listening to Nisennenmondai three-track trance N suggests that whatever Sherwood did, the band already knew what it wanted out of him. N is only slightly more abrasive than #N/A and just as percussion-driven. The group plies its minimalist trade to immediate effect on “1” and the unrelenting helicopter guitar tones throughout bear a striking similarity to most of N.

Only on the two live dubs that conclude the record does Nisennenmondai approach its slightly noisier past. The group’s focus is absolute. For all its pretense, #N/A an album whose hypnotic precision is seductive and convincing.

Similar energies emerge from another trio, Boris, in its third collaboration with fellow Japanese noise maven Merzbow on Gensho (Relapse).

Gensho (“phenomenon”) is just the latest release for a group whose unwieldy discography and unabated exploration of rock music continues. Despite three full-lengths in 2015 alone, the group is back with a 74-minute release.

The first section serves up reinterpretations of older material, one new track, “Resonance,” and a cover of My Bloody Valentine’s “Sometimes.” This is Boris at its most lumbering as its members take heavy grunge guitars and occasional black metal vocals and let them linger (think Earth or Neurosis or themselves in past incarnations). Cuts like “Huge” and “Vomitself” — from 1998’s Amplifier Worship — sound like the originals, but the title track from 2006’s Rainbow couldn’t be more different. Their cover of “Sometimes” has none of the light touch of the original.

The four-track second disc is all about Merzbow. It’s intended to be played simultaneously, not unlike the two sides of 2005’s unrivaled Dronevil. Like Boris, Merzbow is ultra-prolific; unlike Boris, his aggressive atonality is limited in scope and utility (not to mention the pleasure it gives). Even with “Farewell” synced, “Planet of the Cows” is all confrontation and each of his 16+ minute compositions exhaust the listener’s capacity for harsh electronics, distortion and feedback. One wonders if past Merzbow material wouldn’t have made equally suitable accompaniment.

Still, their ongoing collaborations (2011’s Klatter was the most recent prior to this) reveal kindred spirits in pursuit of yet-uncovered musical fruits. Like Nisennenmondai, the explorations of Boris and Merzbow reveal a world alive with possibility on the other side of the planet.