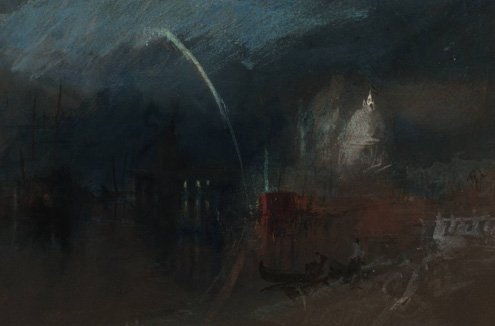 .M.W. Turner visited Venice only three times in the final 20 years of his life, staying a combined total of four weeks. Yet time and again the British “painter of light” drew on his Venetian memories to produce sublime and gauzy dreamscapes that reflected an enduring harmony between artist and place.

Venice’s glittering waterways are a major theme in Turner’s mature work. The city occupies more than 500 drawings, 150 watercolors and several paintings in oil, a handful of which have broken auction records.

Turner’s Venetian view was initially shaped by figures like Canaletto, Shakespeare and Lord Byron — all had seen Venice and all transported the British painter’s imagination before he arrived for his first stay in 1819. Barred from traveling to the Italian Peninsula during the lengthy Napoleonic Wars, Turner was 44-years-old when he finally arrived and settled into the Albergo Leon Bianco near the mouth of the Grand Canal. A Romantic landscape painter obsessed with effects of light, color and water, Turner churned out an astonishing 120 sketches on this five-day trip alone, painting more when he returned to England.

Two subsequent sojourns followed, a week spent at the Hotel Europa in 1833, and two more at the same hotel in 1840. Northern Italian masters Canaletto, Titian and Tintoretto fascinated him, but Venice itself became an obsession.

During his 1840 visit, Turner climbed to the Europa’s rooftop every evening after dinner to paint watercolors of Venice by moonlight (“Venice: Santa Maria della Salute, Night Scene with Rockets”). Fellow artist William Callow, also a guest at the Europa, found the efforts of his driven contemporary startling: “I felt quite ashamed of myself idling away the time whilst he was hard at work so late.”

“This place [Venice] is quite beyond everybody but Turner,” wrote Victorian art critic and emphatic Turner champion John Ruskin in 1841. Turner’s atmospheric oils and watercolors were an innovation at the time. At once misty and incandescent, luminous and lugubrious, they were widely admired by peers and critics, and even by detractors who had criticized his vibrant color choices in the past. Turner’s Venice paintings influenced the Impressionists and the Abstract Expressionists of the 19th- and 20th-centuries, and even inspired Ruskin, a proud owner of a number of Turner paintings and the executor of his estate, to take up residence in the city and critique its art and architecture in his three-volume tome, “The Stones of Venice.”

At the peak of his fame, Turner showed at least one Venice painting at London’s Royal Academy annually until 1846. He was already England’s most successful artist in 1833 when he showed his first oil painting, “Bridge of Sighs, Ducal Palace and Custom-House, Venice: Canaletti Painting,” to great acclaim. Based on an 1819 sketch, it pays homage to the 18th-century cityscape painter whose vibrant vedute of Venice profoundly influenced Turner. As Venice levitates between lagoon and sky on the horizon, Canaletto stands pondering his easel on a plank in the left foreground.

Among the trio of paintings Turner exhibited at the Royal Academy in 1841 was “Giudecca, la Donna della Salute and San Georgio,” a diaphanous oil set on a Giudecca canal with the Doge’s Palace visible in the background. The picture brought effusive praise from the Art Union of London: “Venice was surely built to be painted by Canaletto and Turner.”

In 2006, U.S. casino magnate Steve Wynn bought “Giudecca” for a record $35.8 million, becoming the most expensive British painting in the world at the time.

Turner’s Venetian scenes are often redolent of the literature that sustained his imagination until he first visited in midlife. “Grand Canal: Scene (a Street in Venice)” takes a cue from Shakespeare’s “The Merchant of Venice,” which amid crowds shows Shylock leaning from a window holding a document, scales, and knife, a reference to his demand for a pound of flesh. His 1836 seascape, “Juliet and her Nurse,” featuring Shakespeare’s star-crossed heroine in Venice was panned by then-popular Blackwood’s Magazine as “a strange jumble.” Evidently Turner saw Venice as more romantic locale than Verona.

Lord Byron, the Romantic poet who resided in Venice, also influenced Turned. It was Byron who compared the city’s fatalism to that of London, lamenting the fall of the once-great mercantile power in his epic poem, “Childe Harold’s Pilgrimage.” At one exhibition, Turner accompanied his “Bridge of Sighs” with lines adapted from “Childe Harold,” whose final portion was published in 1818, just before Turner embarked on his first trip: “I stood upon a bridge, a palace and/A prison on each hand.”

For Turner, as it was for Byron, Venice comprised of two worlds, one of beauty, the other of decay. Ravaged by superstition and indulgence, and by the Austrians and French, the city was in decline by the time Turner arrived. As Britain expanded its empire, Turner painted the shimmering vestiges of Venice’s glorious past while all too aware of its present ruin. Trash bobs in brown water at the feet of Canaletto as he contemplates his easel, and a poem Turner wrote to accompany the seemingly-tranquil 1836 seascape, “The Sun of Venice Going to Sea,” hints at an impending shipwreck: “Venezia’s fisher spreads his painted sail so gay/Nor heeds the demon that in grim repose/Expects his evening prey.”