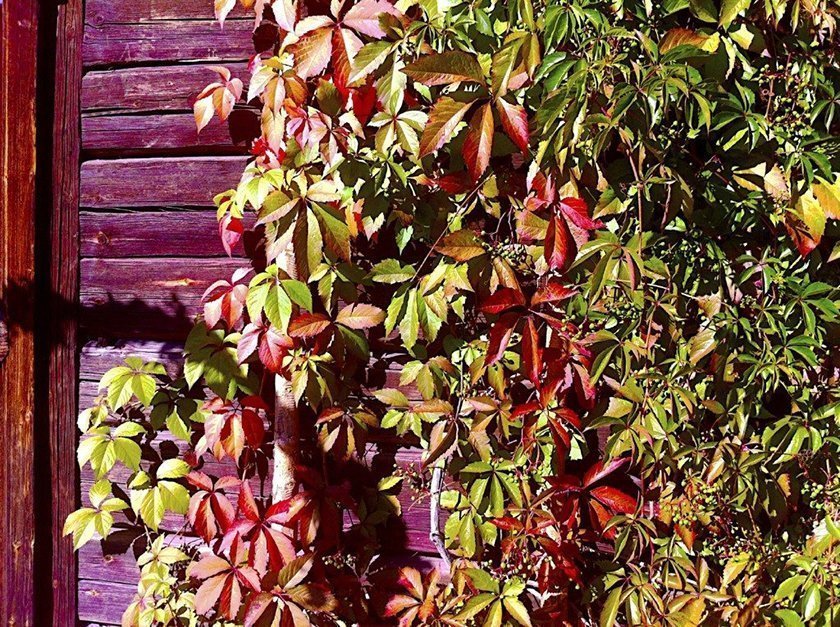 Virginia, creeping into late summer...
I

t was a few days ago that I noticed it in the garden. Welcomed by the sun’s heat, flashes of yellow and orange – Virginia creeper – had sneaked in among the green foliage.

I looked at the calendar and noticed August 15th had come and gone, taking with it June’s lingering late evening light. In Italy, August 15th is a watershed. Known as Ferragosto, it’s both a national and religious holiday that marks the peak of the country’s summer vacation. Soon after comes “the return,” as vacationers migrate back home.

In comparison to more romantic dates, such as the June solstice celebrated as summer’s peak in Nordic countries, August 15th sounds institutional and mathematical; more like some tax day than a Catholic holiday and the harbinger of fall.

Even though autumn begins officially in late September, mid-August is the seasonal tipping point, when days visibly change their length and summer’s end acquires an inevitable feel. Ferragosto is one of the few tipping points that can be recognized the moment it occurs rather than in retrospect.

Another recognizable tipping point was once pointed out by an aged aunt, who, at my son’s bar mitzvah, noted the wisdom of Judaism, which specifically identified the 13th year as the moment in which boys became men. “It seems impossible now. Your son’s a boy now. But by year’s end, he won’t be.”

At the time I smiled indulgently at her remark. But she was right. On his 14th birthday my son was not fully a man, but he was definitely no longer a boy.

Now was the moment to take on the challenge of hiking down the Ferrata Ivano Dibona.

In my own life, the only tipping point I noticed as it happened was actually on a Ferragosto. It was in the year 2000, when I turned 40.

That year, our annual family vacation in Cortina d’Ampezzo felt special. Everyone noticed the rare progression of perfect sunny days and the particular harmony of our group of friends.

For some now-forgotten reason, at a convivial dinner I, along with two friends who were also turning 40, decided that this was the moment to take on a challenge: completing one of Cortina’s most famous hikes, the Ferrata Ivano Dibona.

The Dibona is a classic. Its suspension bridge — the longest in the Dolomites — became famous thanks to the 1993 Sylvester Stallone thriller “Cliffhanger.” In addition to the bridge, there is a tunnel and several ladders on vertical faces, as well as numerous narrow ledges where you must clip yourself to cables.

True mountaineers consider the Dibona easy-peasy. By the standards of climbers who set their own cables and routes it is, since it is attrezzata, or equipped with permanent cables and steel ladders located at the difficult points. Nevertheless the Dibona’s length is in fact a real challenge; over eight hours of rugged, treeless terrain with no resting spots.

After much teasing, Mario — an experienced hiker and true gentleman — agreed to guide us, the three middle-aged ladies, on this adventure.

We crept away from our sleeping families at dawn to reach the Dibona’s jump-off point at 3,000 meters. In the parking lot of the chairlift that would take us up, we put on our rented helmets and climbing harnesses. After another lift, we had a cappuccino against a pink sky at the (now-closed) Lorenzi hut.

We shivered in the dawn air and joked about the day ahead. But my heart was in the pit of my stomach. Normally I avoided hikes with precipices and scary views and the day promised many of both. Mario reminded us that the worst was at the beginning and that it was mostly downhill. I swallowed my fear.

We set off. I watched every footfall carefully. I bounced across the 30 yards of the feared suspension bridge, my eyes fixed rigidly on its end. I fixed my gaze equally firmly on the rungs of the ladders, which were freezing. On the narrow ledges, I risked skinning my nose as I clung to the rock walls.

After a few hours, it felt easy and like flying. Although we ate our lunch of bread, cheese, and chocolate as calmly as if on a blanket in a meadow, our feet hung over a ledge.

By now, the pink Dolomite rock shimmered in the heat. The afternoon was a long slog. This was definitely more mentally and physically challenging than the more spectacular dangers at the beginning of the walk. One of our group had a meltdown and refused to budge. Mario pulled her back from her psychic precipice. As for me, I just put one foot in front of the other, staring stolidly at my red boot laces.

The final bit of the hike was through woods I knew well. At the trail’s end, our families met us, cheering.

Back in town, I floated through the routine of the children’s bath, dinner, and the obligatory aperitivo.

Back in town, I floated through the routine of the children’s bath, dressing for dinner, and the obligatory aperitivo in Cortina’s crowded Enoteca on a cloud of achievement.

Another friend had organized a celebratory dinner for our big group. There were toasts to our conquest of the Dibona as well as congratulations on turning forty. The night was clear and starry. Crisp mountain air cooled my sunburned face.

In the midst of what felt like perfection, an intuition that nothing would ever be the same stabbed me.

And it wasn’t. For the first time ever, I and several friends extended our Cortina stay into September. But the magic was gone. The weather broke and it rained.

Back in Milan, in the following months, several marriages, mine included, faltered. Some aged parents died.

August 15th, 2000 didn’t make us adults, not in the same way as my son’s bar mitzvah had. We were already adult. But after Ferragosto on the Dibona, we were all very different ones.