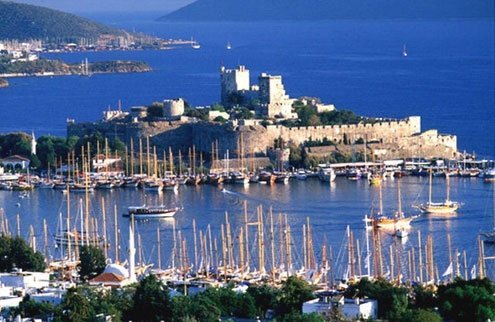 The port city of Bodrum in southwest Turkey.
S

unshine, beach, and — if possible — cocktails on the beach: That’s what I had in mind for my summer vacation, and I was ready to do anything to get it.

When I began planning for the summer many long months ago, I was among those people who hadn’t had a proper sunshine holiday for three years (yes, sadly, we do exist). Scheming in the chill of wintery London, I decided to get to southern Italy by the time the weather turned hot.

But that idea soon evaporated, along with the deposit and flight money, when my partner decided to quit his job and move onto new and better things. Supportive girlfriend that I am, I gritted my teeth and told him it didn’t matter. Who needed a sunny holiday, even if said supportive girlfriend had been dreaming of the break for years? Inside me, though, panic kicked in.

But lo and behold, I counter-attacked. I refused to give up on the sun.

Instead of Italy, I decided to join friends on an adventure to Turkey, to Bodrum, a port city in the southwest part of the country. I booked a mouth-watering flight, price-wise, and off I went.

Land of Ataturk, liberalism, Orhan Pamuk, anise-flavored raki and more, Turkey is magical, a secular Muslim country now living through a period of intense political and social transition. It’s also become a favorite for European tourists, who get relief from eurozone prices.

At Bodrum Airport, we were picked up by a jolly taxi driver who endearingly chose to call my guy friend Ms. He gave us a broken English tour through the “real” Bodrum — chock with (literally) young Turks (most of them milling around) — before heading on to “posh” Bodrum, home to the city’s tourist contingent.

Just as we got off on the hilly side of the peninsula, our friend’s neighbor bounded up on his scooter, popped my suitcase on it, and told us to follow him to my friend’s villa. In the driveway was a beautiful golden shepherd. I petted it and asked about the owner, but after a week it became clear the dog was one of many local strays.

Bodrum has is steeped in ancient history. It was once the Greek city of Halicarnassus of Caria, home to Mausolus, governor of the province in the third century BC. The massive above ground tomb built to honor him, whose ruins still exist, coined the word mausoleum and was considered one of the Seven Wonders of the World. Crusaders came later, building the city’s 13th-century castle.

But we preferred hedonism to history. Over the next few days came evening swims at the pool, a meal by the bay, beach time, tennis and a trip to a local Turkish bath, an experience in itself. My friend, who knew the area well, took us to an authentic bath, where local men and women are segregated. We lazed, had our dead skin scrubbed off, and were soaped down.

One meal was a barbeque of fresh meat and fish picked up from the market and grilled late into the night. At a beach club, we found a floating trampoline and took turns on it with Turkish kids. The Aegean Sea is at the same time refreshing and biting (moving from 35C air into much colder seawater can sting).

Our last supper was lots of shish kebab (with a little raki thrown in), enough to make me realize that three years between summer vacations is too long. Sunsets all over the world need their gazers.