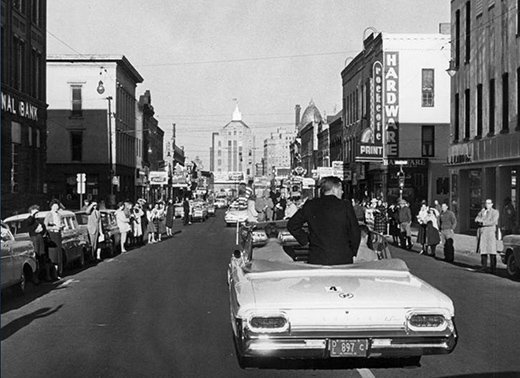 In Rockford, the word "thriving" doesn't apply as it once did.
I

have been travelling lately: To my native Rockford, Illinois — where my brother, sister and I began dismantling our childhood home — and to Paris for work. The juxtaposition recalled a comment by another Illinois expatriate, Ernest Hemingway. “Broad lawns and narrow minds,” he wrote of Oak Park.

When I was growing up, Rockford was truly a small city with a closely entwined topographical and social structure. It had a downtown with hospitals, cinemas, banks, department stores, and churches. It had a nearby residential area for its establishment, whose members attended the same schools, churches, and clubs. It had its rites: Thursday evening roast beef at the University Club, or fried chicken at the Country Club; Saturday morning at Stewart’s department store downtown; and Sunday morning at Smith Oil for lawnmower fuel, and the Auburn Street Hardware for grass seed.

But after living in places where people flee from provincial childhoods — New York City, Paris and Rome — I know that parochialism is less about geography than attitude. In any place, only a tiny percentage of the people are open-minded and curious. Smaller places make it easy to know them all if you look carefully. Luckily my family did.

By the time I left Rockford for college in 1978, the transformation from “Pocket City” into a dispersive “Edge City” was well advanced.

Like our Midwest tornadoes, the centrifugal forces of cheap land, limitless parking, and outside-city-limits zoning anarchy uprooted social and economic cohesion, flinging its bits out on the farmland between the town and Interstate 90, which connects Rockford to everywhere else. Now, the venerable downtown businesses that survived jostle with chain stores. Without a traditional street grid, cars struggle along a tangle of frontage roads and parking lots whose manufactured bucolic names suggest nothing but real-estate developers’ total lack of self-irony.

My brother, sister and I spent three days lost in the town where we grew up.

But the truly disorienting things were those that hadn’t changed: including my own bedroom, with its yellowed clippings from high school on the bulletin board. Suddenly, I was an adult in childhood settings. The smell of the University Club awoke an old desire to hide in the ladies’ cloakroom and pet all the grown-ups’ fur coats. Walking on a nearby street, I could have been five, 10 or 15, and on my way to school. I knew interesting details about the inhabitants of each house. I can’t say the same for anywhere else I have lived.

As we filled bags for the Salvation Army, my brother, sister, and I shared an epiphany. We liked the idea of a familiar house, one that was also bigger and nicer than what’s available or affordable where we live. That the house was in a city with a shared family history and a pre-existing social position made the circumstances all the more appealing. So did the idea that a few Rockfordians would probably gladly slot us back in.

One day my brother and I headed for a small shopping area near our house for gas, hardware store things, and lunch at the Maid Rite restaurant. But weeds grew around the pumps. The Auburn Street Hardware was boarded up. The Maid Rite, which had hosted my first independent meals out (in fourth grade on my mother’s Garden Club days) was closed. The eponymous Maid Rite sandwich (ground beef loose on a bun) and a Coke cost $1.47.

All gone? No. It too had moved to Edge City.

We eventually found the Maid Rite in a strip mall. We had our sandwiches and Cokes.

Hemingway would have said: “And it was good.”

But headed home, the unrefined and un-Proustian taste of ground beef and onions faded from my palate. It occurred to me that the taste was all that remained of a world that had once been a whole world for me. And the words of another great American expatriate came to mind; Gertrude Stein’s epitaph for Oakland: “There is no there there.”