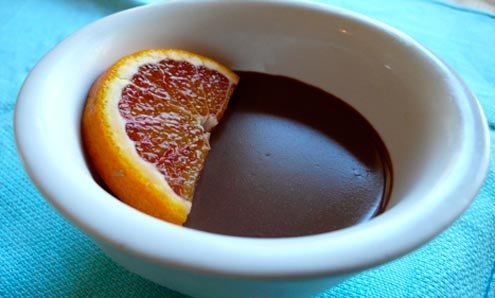 have had quite a few opportunities to cook in recent weeks. Nice, you’ll say. Nice indeed.

But the reason I’ve had an inordinate amount of cooking time is that we, like millions of others in Italy, have had problems with snow.

It’s a complicated story, but basically we found ourselves housebound for nearly a week. Housebound as in literally confined to the house with hardly a soul passing outside by and the only major noise that of the snowplow.

We had plenty food, a stash of chocolate, fuel and an Internet connection. But if you ask me, fun wasn’t the word. It’s never fun to have no choices.

I often liken our lives on this Umbrian mountain to an old proverb about Italian coffee: It should be had as sweet as love and as strong as death.

And living up here is sweet. We have beauty in spades: Clean air and breezy sunsets for most of the year. We can watch life unroll based on the passing of the seasons, a pleasure forgotten by most people tied to the rhythm of shopping malls, which is to say no rhythm at all.

But winter is cruel, my friends.

I’ve had enough of the white stuff, and even though the storms have blown by, getting back to normal has been tedious. Even basic freedoms were limited for a time. We took our daughter to school, bought some bread, and hurried back. Having to drive on a windy road covered by a thick layer of ice is not particularly inspirational. In fact, my husband does the driving. I prefer keeping my eyes shut.

— Soften the gelatin sheets in cold water. Bring the milk to simmering point, add the chocolate and melt it. Add all other ingredients rest and bring to near boiling point.

— Add the softened gelatin, stir to dissolve, switch off the heat.

— Divide the mixture among 6 dessert bowls.

— Cool desserts uncovered until cold, then cover and refrigerate until set (approx. 3 hours)

For the topping, cut two oranges in half and then into 1/2 cm (1/4 inch) slices. Place them in a small pan and add just enough boiling water to cover. Cook orange slices on medium heat until tender, then remove and set aside.

You’ll be left with a couple of teaspoon liquid. Add 3 tablespoons of brown sugar and simmer on low heat until melted and bubbly. Pour over the orange slices and cool. Arrange slices and syrup over the chocolate dessert just before serving.