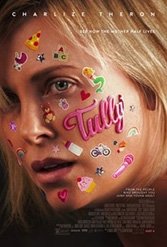 For starters, only Diablo Cody — specifically the Cody of “Juno” and “Young Adult” — could write this movie. It falls squarely under the category of fractured fairy tales, and thanks to Charlize Theron and Mackenzie Davis the fracturing makes for snappy if Tabasco laced domestic comedy.

Theron is Marlo, an overweight suburban mommy machine awaiting child number three and at wit’s end. She does what she can but motherhood — add son Jonah’s instabilities — couldn’t further from bliss. Hubby is nice but no help. Marlo, no stranger to depression, is plus-sized unhappy.

Ah, but a rich brother bears if gift, a night nanny, if only Marlo will put aside serial killer fears and accept. She does so only grudgingly, and in comes Tully (Davis), 26, and a chipper version of Wonder Woman. She’s swell with the kids, provides moral and practical support to Tully, and eventually plays sex “therapist’ — to interesting results.

What Cody and director Jason Reitman (also of “Juno” and “Young Adult”) do unsparingly well is to strip the Hallmark version of motherhood into a cross between a Dante bolgia and the Bates Motel. Sleeplessness is agony; breastfeeding (and assorted pumps) about as romantic as the smell of jet fuel. But what Marlo can’t any longer handle, Tully can, making a backhanded argument for whether it’s better to be fruitful and multiply or remain an alien-like 26 forever, on the outside mischievously looking in.

Theron loves playing against her diva grain. She’s done serial killers and array of characters devoid of empathy. Here, she’s a brilliant walking version of the Great War, mother, commander and battlefield casualty. Which puts her Marlo in awe of unbreakable pop-tart Tully. “You’re convinced that you’re this failure,” Tully tells Marlo, “but you actually made your biggest dream come true.”

Actually, though, dream-weaving isn’t quite that easy. At one point, Marlo waxes nostalgic about her 20s. “But then your thirties come around the corner like a garbage truck at 5 a.m.”

When Tully insists “girls heal,” Marlo is having none of it: “No, we don’t. We might look like we’re all better, but if you look close, we’re covered in concealer.” In a movie that delivers its share of plot twists and wacky wit, the punch line is no joke.