Tucker: The Man and His Dream 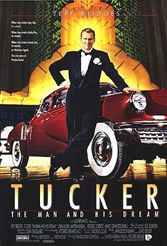 Frances Ford Coppola’s handsome “Tucker” has much in common with Martin Scorsese’s “The Aviator.” Though made 15 years apart, both try to give American legends a heroically fair shake. John Preston Tucker was a self-made automobile entrepreneur whose radical 1940s sedan designs provoked resistance and envy among the Big Three automakers in Detroit. In the end, the big guys humbled the little guys. End of morality play.

Jeff Bridges brings his faraway, dreamer’s look to bear (plus the 1,000-watt smile) and Coppola showers the films in gorgeous props. But it may be too pretty for its own good, and Tucker too minor a figure to merit all the fuss. Since Coppola has always said he admired Tucker’s visionary verve, it’s not hard to imagine him as a stand-in (Coppola’s Zoetrope Studios never really cracked the big-time). Still, an engaging story lavishly framed and well told.