Tu, Lei, and Everyone Else 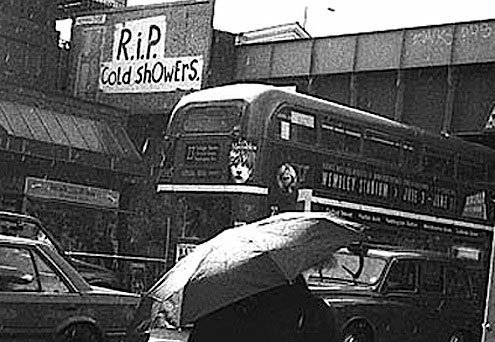 North into rain.
I

am off to England next week, and for the first time ever, I’m praying hard for rain. The reason? My brother, who has invited us to spend a week in an idyllic thatched cottage in the heart of rustic Dorset, has just bought a boat, and has plans for us all to spend long hours out in the freezing waters of the Solent, being buffeted by the winds and the waves.

When we spoke on the phone, he was full of enthusiasm about the feel of the icy spray and reminded me to bring waterproof kitbags with a change of clothes for “when it gets really cold.” He sounded so keen and full of beans that I didn’t have the heart to tell him the truth — that Italy has turned me into a wimp. Being a hardy West Country girl, I have never felt the cold and made it a point of honor not to wear a sweater when I played hockey as a girl, even though my flesh was turning blue. I’ve brought my children up to think the same way, and they laugh when their friends at school turn up looking like Michelin men, with padded coats, gloves, and hats. But although I dare not admit it to my children — I hardly dare admit it to myself — I think the Italian intolerance to being cold and damp has finally contaminated my real British stiff-upper-lip self.

Frankly, I blame it all on a blood transfusion I had in Spoleto after an accident 18 months ago.

That is when the rot began to set in. I wouldn’t mind, but I do rather wish that instead of passing me the cold-hating gene, the kind donor had transmitted some rather useful and desirable Italian trait, such as looking unfailingly gorgeous or being able to make a decent cup of coffee. You might think that some of these would naturally rub off after spending so much time here. Indeed, when I go back home, people often say to me: “Oh, you must be almost Italian by now.” In fact, nothing could be further from the truth. Not that I’m one of those expat diehards, who drink gin and tonic at sundown (more’s the pity). It’s just that no matter how long I live here in Italy, there are some things I just can’t get the hang of, and I begin to think I never will.

Take cooking pasta, for example. Getting the al dente bit right is easy. But even though I probably cook it every single day of my life, I still can’t manage to gauge the quantities, and end up with enough left over to feed an army. And what about that cup of coffee? At the end of a rather good dinner party the other evening (too much pasta though) I spoilt it all by serving what even I confess was an undrinkable concoction tasting like burnt brown water. My poor guests nearly gagged, searching around desperately for the proverbial aspidistra — sweet revenge for all those unspeakable cups of Italian tea that I have had to suffer down the years!

Then there is the knack of getting served in a crowded bar.

At university, I learned to discuss Dante and Pirandello, but I still haven’t perfected the art of projecting my voice over the heads of everyone to order my cappuccino just the way I like it. I’m also embarrassed to say that although I speak pretty good Italian, this tu and Lei business still makes me go hot and cold. It’s not the verb endings that bother me. It’s understanding exactly when to use one form and not the other, and, almost as bad, remembering which one you used on a particular person the last time you spoke to him. And how humiliating it is to use tu on someone, only to have the implicit rebuke of a Lei in the reply.

But there is one area where I have come to the conclusion that there is definitely no hope whatsoever. Try as I might, I just cannot get to grips with Italian television, especially when it comes to politics and comedy. That really is a bridge too far, I’ve decided. I simply can’t understand how anyone can watch those interminable programs, where a bunch of boring guests, almost all of them men, shout over each other until the volume becomes unbearable, while the host vainly tries to restore some kind of order.

As for so-called comedy programs, I can sit stony faced through just about any episode, be it sitcom or satire, while my (Italian) husband writhes in his chair, with tears of laughter streaming down his face. It’s no good, I just don’t get it. Thank goodness for satellite TV.