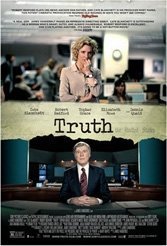 James Vanderbilt’s “Truth” covers so-called “Rathergate,” the 2004 media scandal that rocked the United States after CBS TV news magazine “60 Minutes” alleged in a segment by evening news anchor Dan Rather that then-President George W. Bush had failed to fulfill his duties while a member of the Texas Air National Guard during the waning years of the Vietnam War, all but implying he dodged the war. But as soon as CBS producer Mary Mapes (Cate Blanchett) green lighted the segment — based on dubiously leaked memos — and Rather (Robert Redford) aired it, backlash erupted — with conservative groups persuasively alleging the documents were fake.

Vanderbilt’s movie is the painful chronicle of a major snafu, as CBS’ efforts to defend its decision to air the story gradually fall apart. It’s also the story of the slow if inexorable discrediting of two major figures, Mapes, a respected producer, and Rather, a staple for decades on the U.S. news scene. Two weeks after the program, CBS was forced to publicly admit the documents had been forged. Within months, Mapes was dismissed and Rather retired under pressure. The case was particularly sensitive since the segment was aired at the height of the 2004 U.S. presidential campaign, with Bush up against Democrat John Kerry.

Vanderbilt tells his story straightforwardly, falling back on the star power and acting gifts of Blanchett and Redford. But aside from a strong whiff of polemics there’s nothing particularly new here. The script is based largely on Mapes’ 2005 memoir “Truth and Duty: The Press, the President, and the Privilege of Power,” which to some extent suggests the matter of whether the documents were forged was secondary to the truth of the allegations, namely that Bush had shirked his Vietnam obligations. Here, CBS — which refused to advertise the movie — is portrayed as being exposed to intense political and corporate pressure to revoke the story (with Rather as a target), which while adding a dramatic layer may not be entirely truthful either.