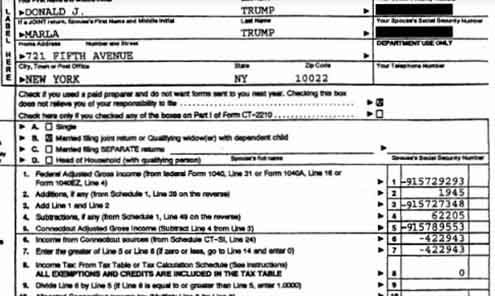 ix weeks before the 2016 American presidential election, a New York Times reporter found in her mail box what appeared to be pages of Republican candidate Donald Trump’s tax returns.

There were only three pages, the first page of three 1995 state returns, documents that replicate the Internal Revenue Service return. The first question was whether the returns were real. Of the $915,729,293 loss Trump claims, the “91” had been typed in even though the returns were computer-generated — almost as if someone added extra numbers to a check before cashing.

Other questions abounded: Who was the leaker? Why were the numbers typed in? Did Trump really take an almost $1 billion loss?

The best guess for the leaker was Trump’s second wife, Marla Maples, who was married to Trump in 1995. She signed the returns and could therefore disclose them. That may be the reason Trump never attacked this leaker.

The story was a bombshell because Trump broke with the norms of past presidential candidates by refusing to disclose his tax returns. In Italy, just as in the United States, Trump the candidate would not have been required to disclose his tax returns. However, if Trump were a candidate who won election in Italy, he would be required to release his most recent returns and a declaration of his assets.

The accountant who prepared Trump’s returns, Jack Mitnick, confirmed their authenticity. And Trump never denied it. As for the “91,” Mitnick said “the numbers had to be put in there with a typewriter” because his computer couldn’t print a number that large.

Trump did take a nearly $1 billion tax loss in 1995, resulting in his paying no U.S. income taxes for years. “That makes me smart,” he said in a debate with Democratic challenger Hillary Clinton last September.

The technique Trump apparently used to produce a billion-dollar loss that offset his taxable income for years to come was three-fold: 1. He used losses traceable to money other people put into his business and on which he never paid taxes; 2. He was able to use the losses from his casino business against his personal income; 3. He used the losses from one year to reduce his taxable income in as many as 18 other years.

1. How did Trump use other people’s money to inflate his taxable losses? His casino entity borrowed lots of money from third parties and lost lots of money. He then appears to have settled with those creditors — who had no hope of getting repaid in full — for pennies on the dollar. Generally, a taxpayer can’t say he lost money for tax purposes unless he already reported that money as taxable income. Or, in the case of loans, which are not reported as taxable income when the loan money is received, the taxpayer repays the loans with money on which he already paid taxes (after-tax dollars).

Trump seems never to have reported as taxable income the money he forced his creditors to write off. He apparently swapped the casino debt for partnership interests worth far less. As a result he would not have to repay those loans with after-tax dollars — or any dollars, except for the pennies his creditors grudgingly accepted. Instead, Trump appears to have aggressively used this swap technique, a tax loophole Congress did not close until 2004, and that allowed him to deduct other people’s losses against his taxable income.

2. Trump could deduct these losses against personal income he reported on his tax return — such as his salary from the TV show “The Apprentice”— because his casino entity was formed as a “flow-through” entity. All the taxable income and loss of the casino entity “flowed through” and was reported on his personal income tax return. This tax structure is not unusual; Italy has a similar, “transparent” tax system for businesses.

3. Business losses in one tax year in excess of one’s taxable income that year can be “carried over” to as many as 18 other years to reduce taxable income earned in those other years. These carryover rules have a rationale: the smoothing out of the tax effects of annual ups and downs of business. Trump got more than a smoothing effect, he got a much lower tax bill, perhaps $500,000 less, a form of government welfare. Italian tax law also permits using tax losses in one year against taxable income in other years, but the law is more finely tuned. The number of years one can use losses in the future is more limited and dependent on many factors. One limitation is that deductions of losses must be taken against similar income, not just any taxable income.

Should Trump be attacked for the two basic tax provisions he used: flow-through entity taxation and tax loss carryovers? No. That was the law.

Should he be criticized for aggressively using a loophole that took an act of Congress to close? Probably not. Many taxpayers take aggressive positions.

What we can pass judgment on is Trump posing as a successful businessman when he was in essence a successful tax evader — in the moral, not the criminal, sense.

“Money for nothin’,” as the band Dire Straits once put it, and, knowing Trump, maybe also “chicks for free.”