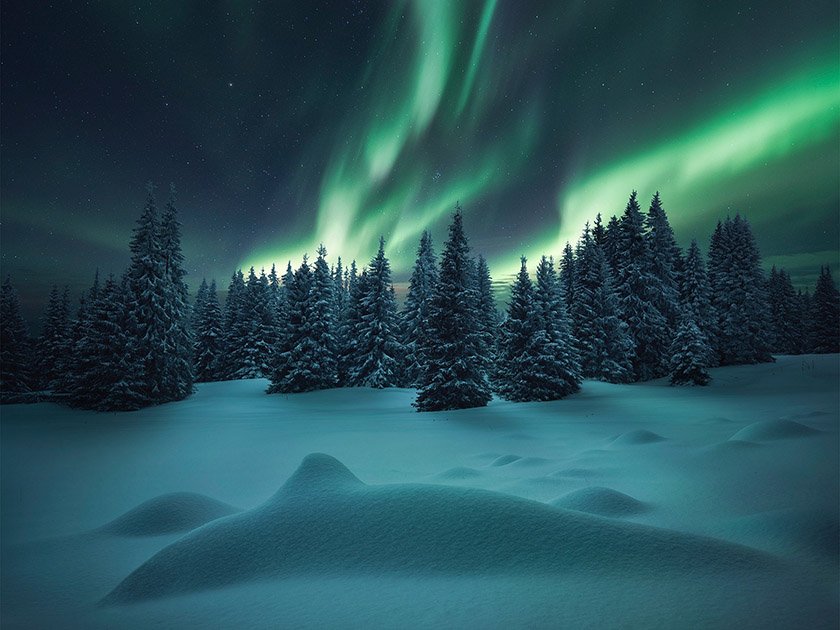 A north so illuminated you put yourself aside, at least briefly.
S

ome weeks ago I traveled north of any north I’d ever known before. A client had invited me to an Arctic igloo, and when I got there I saw a sky like no other, so full of carbonated light it fizzled darkness into submission.

Suddenly I was well above my rural English longitude and miles away from clutter, contagion, and (best of all) the dimly-lit recesses of my thoughts. For once, the beauty of everything around me dwarfed the whole of my internal worries.

How can it be, I sighed to myself, that I live with competing sides of me in near-constant combat, one side craving all money can buy and life can offer, the other wishing to be left alone, kettle on boil, brewing tea from which my childhood demons sip, mean gnomes that can’t sit still. I could write a book called “Fractured Landscapes,” all the more so now, as a sex worker who doubles as the prim daughter of a mother who, if she knew my secret life, would call me mad. What would the village say?

Outland with this client of mine I’d escaped all that. I might as well have been alone on Mars since the client had little interest in asking questions of me.

So I let him pet the domesticated side of the wild me, which he did as if sampling the fabric of a vaguely interesting rug.

Suddenly I was well above my rural English longitude and miles away from clutter, contagion, and the dimly-lit recesses of my thoughts.

This distance was liberating in its way, since the north gave my warring sides reason for a ceasefire.

One part of me, the boy side, I know to be genuinely strong. When I walk into a room I can feel the power of my presence. I’ve sensed this since boys first entered my world decades ago in boarding school. Whenever I felt bullied I’d escape to the school disco where I’d inevitably be asked to dance. I was the girl who was always being asked out but always said no. The idea of it was too stressful.

I remember feeling either too much, too little, or nothing at all. Boys seemed to find this fascinating, convinced I was playing a game with them.

Their mostly unwanted attention did teach me to “read” men as well, or better, than I’ve ever been able to read myself. As a stripper in America I was never scared. I knew the moves. I knew what to say, what not say, and when recklessness was sexy. When club clients offered me $200 for sex I’d laugh in their faces. I knew just what I was doing when I turned them down, just as I did when I agreed not to.

My demons were mostly uninterested in boys and men, as if dealing with them was just a respite from the main event, me.

My power over men, spiced up with money’s inducement, sent me to the top of the world, coaxed by a man who insisted that a luxury igloo in the Arctic (yes, they exist) would improve with me in it.

Like me, nothing about this north was average. Much of the experience, the dazzle of the lights aside, feels otherworldly. I went husky sledding and reindeer sledding, an English country girl on a late winter whirl. Distraction can be blissful. There were times in our igloo when I felt profoundly at peace. The silence helped, silence of a kind I’d never before been touched by. Inner static abated, if only for a while.

Did the man himself matter? Yes and no. I’m terrifically good at acting out fake relationships, an acquired skill that comes with being a self-sufficient dreamer who knows to keep her melancholy self out of the public eye. Exposing a client to darkness (or neediness) unhinges a relationship based on hiring someone to help you conspire in a fantasy.

Distraction is blissful. So is silence.

You don’t want a client to become the boy at the disco, demoralized because you turned him down. That’s what you’re essentially being paid not to do.

Under the Northern Lights I behaved like a star. I smiled. I laughed. And much of it came easily. I can’t imagine a worse fate than becoming that neurotic female writer who milks her family’s rocky history for “fresh” material. Darkness is a virus I have an obligation not to spread.

Since there’s no vaccine, the trick is to defy it.

My northern distraction helped, as did my client’s unknowing complicity. He let me play the part I’d rehearsed while never budging from his self-involvement. I soon switched off, gently touching his hand from time to time, pretending to listen intently.

It didn’t take long to figure out why he didn’t have a girlfriend. He’d exhaust anyone over time, and exhaustion often leads to resentment.

In the end, I got the good bits, all the while knowing I’d soon be sending him on his merry way, and that I, too, would off on mine, merry or not, and that I’d end up looking back on it all as a long weekend spent in the company of a time-share boyfriend with a solid wallet.

And that’s just how it was. If only I hadn’t come to treasure this new and often quietly forbidding north as a manifestation of my own Arctic inner side, which now awaits its own set of lights.