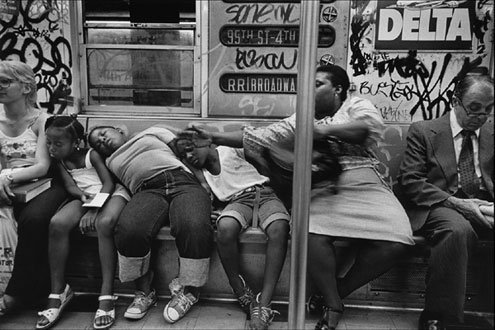 ies. The word punctured the quiet rush hour hum of the car. Eyes swiveled up from mostly white faces and moved back down to books and iPhones. The word came again, no louder, no softer, the tone sonorously Shakespearean: “Lies.”

The speaker had slid in at 14th Street and now sat, feet close together, his arm draped over the metal barrier beside the seat. He said it again: “Lies.” Third time around nobody looked up. He’d missed his chance to catch their attention. Had probably missed it as soon as he sat down, before he even opened his mouth. As stage-ready as his voice was, we weren’t on a stage. We were on the subway. And he had dark skin, plastic bags in both hands, and the scruffy look of someone who might not have regular access to a shower.

He didn’t let his seeming lack of audience stop him. “White people, they’re all liars. Liars and… thieves.” He drew out the word “thieves” as long as a crowded commute. “White people, you can’t trust them. They’re all Satan’s spawn.”

It was the start of a classic rush-hour rant of the kind I’ve always thought only outcasts themselves believe anyone listens to. Nobody listened here, either. And why should they? His words were toxic. The F-train is frustrating enough without additional spew. Normally, I would have tuned out.

Instead, I found myself paying attention.

He was 70 years old, or so he said; he didn’t look it, but he was. He also knew a thing or two. Like that all white people were liars and thieves and murderers. He mentioned Marcus Garvey. Then George Washington.

A woman standing near him murmured something noncommittal.

“I wasn’t talking to you,” he snapped smartly. “I was talking to myself.” I suppressed a laugh.

As our car rattled on into Brooklyn, his rant subsided. My mind wandered into mental calculations. At 70, he’d have been born in the mid-1940s, say 1944. His great-grandparents might have come from a time when slavery was still legal. The Civil Rights Act, outlawing discrimination based on race, wouldn’t even have been passed until he was 21. And though he’d lived to see a black man enter the White House, the pursuit for racial equality has, in other respects, gone backwards.

Take the level of black prison inmates. On average, one in three black men are jailed in their lifetimes. More black men are in prison, on parole or probation, than were slaves in 1850. They’re singled out before they even get there: blacks and Hispanics are three times more likely to be searched in traffic stops than whites; blacks are twice as likely to be arrested, and four times as likely to endure some form of police coercion. When convicted of crimes, African-Americans receive jail time that is 10 percent longer than whites for the same crimes.

The problems go well beyond the sentence: after their release, black men’s wages grow at a rate that is 21 percent slower than for the whites who were in prison with them. Felony disenfranchisement laws mean that a full 13 percent of black men can’t vote — and can be discriminated against, legally, in employment, education, public benefits, and housing.

That’s just the prison side of it.

So it’s not just the drugged, the drunk or the diseased who rant on subway cars: it’s also those desperate to be heard. Who have, perhaps, no other, more productive platform for doing so; who have never been offered that opportunity. And never had the resources to seize it.

Somewhere near Carroll Street, the man reached into a plastic grocery bag looped around one wrist and drew out a corncob. He started to eat. For the first time, we locked eyes. Without thinking, I smiled. He smiled back. And then went back to his corn.

A couple of stops later, I was among many who got off. The man stayed on the train as it rattled on, headed for destinations far less gentrified.