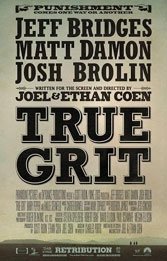 Joel and Ethan Coen are fabulists with a soft spot for odd stories. All the more reason to admire this charming and quirky Western that subverts the genre without betraying character or narrative. In late-19th century Arkansas an impossibly cocky 14-year-old girl (relative newcomer Hailee Stanfield as Mattie) sets out to avenge her father’s death. Mattie travels to a local town in search of avenging mercenaries, a law-abiding paradox of the times. She soon hires an amoral U.S. Marshall, Rooster Cogburn (Jeff Bridges), who is joined against his will by a dandy Texas Ranger named La Boeuf (Matt Damon).

Both are grizzled frontier men, who after much delightful haggling give in to Mattie’s feisty and precocious whims. The odd troika sets off into Indian-country wilderness to hunt down a gang that includes Tom Chaney, Mattie’s father’s killer. All manner of adventure befalls them, which for the Coens means black comedy and a fairy tale sense of the absurd.

Bridges’ Cogburn and Damon’s Le Boeuf are accomplished caricatures, good men in a mean time. Rooster is semi-barbaric but dead-pan decent while Le Boeuf is noble but dumbly self-important. Stanfield’s Mattie gives the story its comic oxygen, as well as its sense of right and wrong. She’s a Judy Garland Dorothy dumped into a Western framework, a know-it-all equipped with sarcasm and aphorisms.

Though the story is told through flashback, with Mattie’s narration opening and closing it, the artistic feel is that of a soft-touch Cormac McCarthy working on a Fredrick Remington canvas. Lovely black stallions go hand in hand with crushed skills. Bridge’s Cogburn is a gossip and a rifle-whore, with Mattie keeping him in line. Damon’s Le Boeuf is a would-be gentleman who disappoints at first but later redeems himself. Ultimately, good guys meet the bad and the morality play is tidied up (Barry Pepper is a foul-toothed shooting star as Lucky “Ned” Pepper, a politely Gothic outlaw).

At times the Coens seem almost too competent, with story seeming to fall under its own yarn-like spell (“I am foolish old man who has been drawn into a wild-goose chase by a harpy in trousers and a nincompoop,” says Rooster). But each witty lull presages a jolt.

While Henry Hathaway’s 1969 version focused on Rooster, with Oscar-winning John Wayne in the part, the brothers insist on seeing the story through Mattie’s eyes. It’s a gem of a choice.