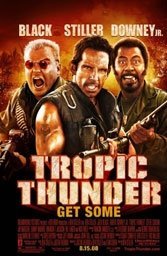 You can’t say “Bridge Over the River Kwai” and “Apocalypse Now” didn’t ask for it. Sprawling and serious, they’ve always begged a good parody. Nothing’s changed. Director Ben Stiller’s laughably bad (and occasionally funny) spoof on war movies and the absurdity of self-important actors has a few promising ingredients, including Robert Downey Jr. as a black soldier who’s really a “famed” Australian actor named Kirk Lazarus. But an onslaught of sight and sound gags do not a satire make.

In nutshell, a hodgepodge of Hollywood stars and assorted has-beens (Stiller, Downy Jr., Jack Black, Brandon T. Jackson, Jay Baruchel) find themselves in Vietnam filming the movie version of a heroic autobiography by a foul-mouthed veteran (Nick Nolte). When the author, bothered by chirping cell phones, tells the wimpy director he has to “put his boys in the shit,” the shit hits the fan.

The spoiled actors are suddenly dispatched upriver where they face cocaine-running guerrillas (headed by a child-soldier with a soft spot for comedy). Of course no one’s around to tell them they’re no longer in a movie. Shameless as ever, Stiller — who plays action hero Tugg Speedman — adds to the “Apocalypse” lampoon by inserting silvers of CCR, The Temptations, The Rolling Stones, Steppenwolf and Buffalo Springfield.

But it’s Downey’s lunatic Lazarus who steals what little show there is. He’s tinted himself Black-Like-Me for the part (“a Koala-hunting nigger,” Jackson calls him). When Stiller announces it’s time to hunt down the “Vietcongs,” Jackson points out they’re not plural (“You don’t say Chineses…”). And so it goes, until Jack Black’s farts and absurdistan bang-bang round out the last 20 minutes.

Credit Tom Cruise with having great fun in the part of coarse and balding hip hop dancing uber-producer Les Grossman. He has the least to lose. And if you’re interested in how a real movie can get botched, see “Lost in La Mancha.”