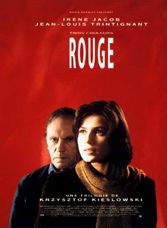 The final installment in Polish director Krzysztof Kieslowski’s three subtle ruminations on the codes of contemporary life is his most sublime. It’s also a major late 20th-century accomplishment. Model Valentine Dussaut (Irène Jacob) accidentally runs over a dog belonging to a retired judge (Jean-Louis Trintignant), a cryptic man who appears to have retreated from society in favor of a kind of all-seeing inner life. She visits him to make amends for killing his pet but soon learns that he’s been tapping her phone. This revelation triggers and later unifies tangents that probe the shortcomings of instant communication.

That the film is set in United Nations bastion Geneva permits Kieslowski to tinker with the significance of authority and the meaning of neutrality. Impressionable Valentine embraces the judge’s sad voyeurism because her own life is a parable for modern estrangement. Her friends and lovers communicate only by phone. Depth is random and nonsensical. Postmodern connectedness is both absolute and haphazard.

Moviegoers can decide which of Kieslowski’s three late masterpieces, “Red,” “White,” or “Blue,” best suits their mood and taste, but the rigorously moral “Red” is particularly powerful on the subject of human connectedness, which is portrayed as a mystery bigger than any attempt to listen in or to manipulate. On the cusp of the web, the narrative anticipates many of its dilemmas.

Kieslowski, responsible for the remarkable “The Decalogue” based on the Ten Commandments, retired from filmmaking after completing “Red,” saying he’d done all he wanted. He was 53 at the time. A heart attack killed him two years later.