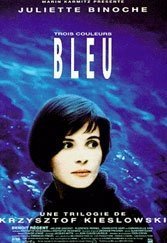 Julie (Juliette Binoche) is the young wife of famed French composer who survives a car crash that kills her husband and five-year-old daughter. This sudden defiling cues Polish director Krzysztof Kieslowśki’s portrayal of traumatized Julie as she begins her progress through an orchestral aftermath that mixes mourning with resentment but gets its high notes from Julie’s newfound and hypersensitive awareness of the tiny acoustics of the day-to-day, whether a flautist on a street or the squeaky birth of mice.

After the accident, Julie shuts down her past, discards most worldly possessions (including her husband’s compositions), and rents an apartment in blue collar Paris. She is cold, aloof and seemingly unable to weep. What, she’s asked by a real estate agent, does she do in life? “Nothing,” she replies, smirking adamantly.

But once in the apartment, small but miraculous details slowly begin poking at her cocoon. These musically swelled miniatures have the power of epiphany. Kieslowśki can make the liquid impregnation of a sugar cube by black coffee into a poem, and he does so here, time and again. He elongates Julie’s pauses so that the musical notes from which her past was built, and which have been seemingly been banished, are given a chance restore themselves.

Kieslowśki dwells on Julie’s stubbornly chosen freedom from all things to build a very noteworthy and hopeful something, suffused with hypnotic Polish Catholic awe at the beauty of life. Around Julie, teased to life, are her senile mother, a sex worker, and a youth who witnessed the accident, her husband’s infatuated co-composer, and Patrice’s pregnant mistress. Since Patrice was also at work on a theme for European unification, it is also a metaphorically a tale of composition, or re-composition; of a quest for identity whose musical author is Julie herself, the truest composer. Loss opens to goodness, which opens to healing, which sings of love. In a word: art.

This was the first of Kieslowśki’s memorable Three Colors trilogy, followed by White and Red, based on the colors of the French flag.