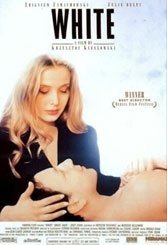 Kieslowski’s ingeniously Homeric comedy begins with Polish immigrant hairdresser Karol Karol (Zbigniew Zamachowski) being divorced by his callow Parisian French wife Dominique (Julie Delpy), apparently for his sexual shortcomings. The impotency would seem like the least of it when he finds himself first homeless in the Metro and then stuffed into a tattered Warsaw-bound suitcase that — what else? — is stolen by thieves. “My luck has run out,” clumsy Karol tell his new and fatalistic friend Mikolaj (Janusz Gajos), who helps him flee Paris.

But his luck hasn’t run out. This charmingly sincere Odysseus has a future, since the post-Communist Poland to which he returns is not the Poland he left (behold neon signs!). Soon, he’s in league with gangsters and reunited with bridge-playing Mikolaj, who, it turns out, is just as much a wounded outsider.

Pain as seen through a comic prism would seem to be Kieslowski’s game, until he turns the tables, weaving a wry morality tale about loss, longing and revenge and the “anything’s possible” side of Eastern Europe just after the fall of communism. Karol and Mikolaj — wonderful work from Poles Zamachowski and Gajos — are bittersweet if hopeful birds of a feather prone to caprice and suddenly given a second chance to get at least some of what they want, allowing the film to double as mediation on post-1989 screwball opportunism and an arsenic-tinted romance with fickle Dominique in its crosshairs.

In Kieslowski’s hands, human nature is the most special of effects. This is the second and in many ways the most withering of the Three Colors Trilogy, 1992-1994.