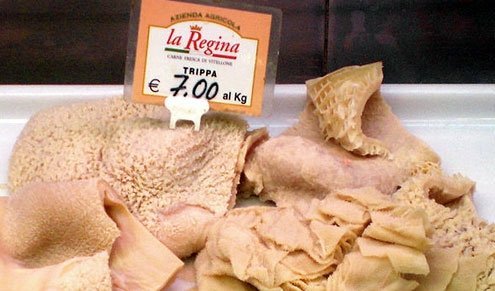 he greatest Roman culinary traditions sprang from the humblest beginnings in the working class neighborhood of Testaccio.

In ancient Rome, the area now known as Testaccio hosted the largest port on the Tiber. Barges bringing in foodstuffs docked and were offloaded, with the goods distributed throughout the imperial city. Wines, oils, and more exotic fare came in amphorae that were emptied with their contents transferred into smaller containers for easier transport.

Amphorae were cheap, easy to make and hardly worth reusing, so Romans tossed them into a heap. The fragments of the amphorae, or testae, eventually yielded a hill, Monte Testaccio (literally “Fragment Mountain”), which still rises up some 35 meters but was probably even more imposing Roman times. In essence, Testaccio was born from refuse.

With the decline of the Roman Empire, the neighborhood emptied out. It wasn’t until the late 19th century that the area reclaimed its former working-class visage, with the construction of a slaughterhouse (the neighborhood’s “chic,” night-life status is a far more recent development).

Slaughterhouse workers were regularly paid in kind rather than cash. They often got the less desirable animal parts that the city’s (mostly religious) elite had no interest in eating, the so-called quinto quarto, or “fifth-quarter” — offal. “Lo Spirito Santo nun abbotta,” went a saying in Roman dialect — “the holy spirit doesn’t fill up your belly.”

Creativity was vital in transforming some of the least delectable animal parts (including kidneys, heart, tongue, brain, pancreas, tail and stomach) into edible, tasty dishes. The deft handling of these spare animal bits endures on the tables of some of Rome’s finer restaurants.

Last year I ate at Piperno, the oldest restaurant in the Jewish Ghetto, with my three Italian roommates. We ordered the house mixed antipasto, which was an assortment of fried goodies. The dish came with four of everything, one for each diner. When we finished, three pieces remained, all the same. I sheepishly asked why they hadn’t touched the last one. The reply came practically simultaneously: “Ma é cervello.”

My Italian food vocabulary was weak at the time and nothing came to mind. Seeing me puzzled, one of them finally gestured towards his head. Brain, fried lamb’s brain — squishy but delicate. Though I probably would have eaten it either way, I did wriggle a bit.

Such dishes (and countless others) form the backbone of the city’s cucina povera. Possibly the most common, and most famously Roman, is trippa alla Romana, Roman-style tripe. Early tripe recipes date to ancient Rome, though they continued to evolve through the centuries.

Some people revolt at the idea of eating tripe, which is an animal’s stomach lining. Others see it as a delicacy. There are those who overlook tripe altogether, saying that it has no intrinsic flavor and serves as little more than a vehicle for the sauce it’s cooked in. For hardy, unflinching eaters, a well-prepared trippa alla Romana is a delicate balance of rich tomato sauce, wild Roman mint (mentuccia romana) and chewy tripe. Like all classic Italian dishes, tripe isn’t that hard to prepare. Patience is the watchword.

The first step in making tripe is cleaning it. No matter how clean it looks from the butcher, give the entrails a thorough scrub before beginning the cooking process.

Once cleaned, the next step is softening. Some people say this should take one hour, others up to four, but I think about 90 minutes to two hours does the trick. Adding some vegetables to the pot gives the tripe a chance to soak up extra flavor before being added to the sauce.

While the tripe is simmering you have plenty of time to put together a simple tomato sauce as well. After all’s said and done, a small portion makes for a hearty antipasto while a bigger offering can serve as a main course.