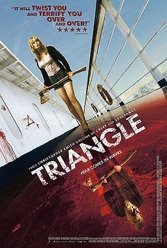 Briton Christopher Smith’s overlooked but deft horror-thriller about survivor’s guilt and delusional schizophrenia is yet another example of how smalltime filmmakers can make a lot with a little, particularly if equipped with a coherent storyline and a strong lead. Smith has both, beginning with Melissa George as a woman named Jess, the spooked Florida mother of an autistic child who apparently takes a day break from her sobbing son to go sailing with friends aboard a sloop ominously named the “Triangle.”

But the vessel encounters a freak storm and the survivors suddenly find themselves capsized and adrift — until, that is, a 1930s-era liner seems to appear out of nowhere. The liner, it soon turns out, is a ghost ship of sorts.

So begins what would seem to be a haunted house (at sea) story that instead of succumbing to the bromides patiently and effectively sheds its early layers to become something altogether more insidious if not viciously provocative. The eerie liner, the “Aeolus,” is the staging area for a looping dèjà vu. Awful events openly repeat themselves. It is Jill who first deciphers the recurring warp, not knowing just why, and it soon becomes clear that the lever of the story is her mind’s tainted eye. Call it a circular nightmare or the wages of sin filtered through a sinister version of the Sisyphus legend.

Nothing else needs saying but that Smith has created a menacing meditation on the human need to cheat death in perpetuity, an impulse that means running through a script destined to play out the same way no matter how many times its protagonist works to abridge it. George’s frantic face often seems more dead than alive, and she carries this little gem on her shoulders in much the same way Sigourney Weaver once gave cool, then frenzied clout to Ripley of “Alien” fame.