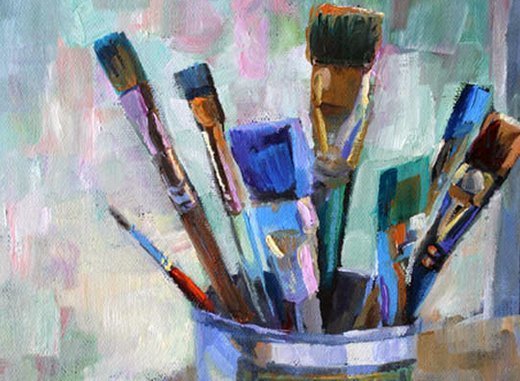 t this time of year, a strange pause sets in, an obligatory winter break that to me has often felt a little forced. My family doesn’t celebrate Christmas, and New Years’ has never mattered much to me.

I’m currently both a graduate student and a teacher, but I’ll leave the subject of teaching for a little later. This December when school was out on both fronts, I wondered what to do with myself.

I spent some time with friends. We ate well — Thai, Italian, Israeli, and Jewish deli food. I drove several hours to see family, and later attended a cousin’s engagement party where I saw seven of my first cousins, making it a sort of reunion.

The act of teaching, like painting, is creative process. Both amount to a way of being. They’re a means for people to relate to each other.

But I also did something I hadn’t done in years: I painted. In high school, drawing and painting were hobbies. I was blessed with an outstanding art teacher who took her students seriously and encouraged them to observe and paint the world around them. Something magical happens when you hold a paintbrush. Your hand and heart feel connected to the canvas. Even in a class told to paint the same image or use similar colors, individual perspective will make each painting different.

I kept my recent work simple. I did one at a “wine and painting” evening, where singles mingle while painting an agreed-upon scene. My vision of a tree and a sunset over a distant city skyline looked like no one else’s.

On my own time, I chose to paint a kiddish cup, a special cup used in Jewish homes on Friday nights to usher in the Sabbath.

Painting as yet unfinished ceramics is a challenge because you never know how the object will turn out. The colors, as you paint, are always lighter and more pastel than they’ll be after the object is glazed. You blend colors, hoping something beautiful will emerge. In that sense, the creative process is its own reward.

Tens of thousands of Los Angeles teachers are striking after the collapse of two years of talks on contract negotiations on salaries, class sizes and poor staffing.

While painting my cup, I was mesmerized, as if I’d surrendered to something beyond myself and was entering the unknown.

I feel the same way when I teach, whether as a substitute or in charge of my own class. The act of teaching, like painting, is creative process. It’s also larger than the sum of its parts. Teaching and learning amount to a way of being. They’re a means for people to relate to each other.

Some teachers (like many painters) get only lip service for their efforts. They’re largely taken for granted and receive nothing back from their students. They also face overcrowded classrooms and indecent pay.

I work in Los Angeles, where there’s a teacher’s union, and many of its members recently took to the streets to protest the lack of respect their profession receives. For the first time in 30 years, public school teachers went on strike.

In support of the teachers, I chose not to cross picket lines when classes started and substitutes were needed. Even though there are many different ways to teach—just as there are many ways to paint a sunset—it’s important that teachers have sense of solidarity about their art—so they can practice it as they see fit.

Scarlet is a writer living in Los Angeles. She loves a good espresso and is sometimes mistaken for Italian.