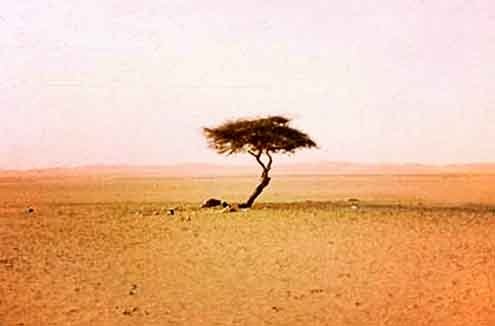 TheTénéré Tree (L'Arbre du Ténéré) was a once considered the most isolated one on the planet.
T

The name was admittedly mesmerizing. L’Arbre du Ténéré was an acacia tree in Niger portion of the Sahara once considered the most isolated tree on earth (it was the only tree in a radius of 400 kilometers). It was flattened by a truck in 1973, with most blaming the Libyan driver for being drunk. The tree’s perseverance must have attracted guitarist Maurizio Abate (an established solo artist in addition to his contributions to groups such as Eternal Zio) and all-around artistic achiever Giovanni Donadini (among other things, a digital art director).

According to the Holidays Records label, the Arbre du Ténéré duo uses “improvisation and harmonic structures” to create a musical portrait of the tree, “from the lonely past to the shape of today, a metallic sculpture which replaced it.” Yes, it’s true that the album was mastered by a name familiar to this column, Giuseppe Ielasi. And it’s also true that Holidays is known for ambitious improv releases — from the likes of Joe McPhee Survival Unit III, Swedish free-jazz master Peter Brötzmann and Turin-based sound poet Arrigo Lora-Totino,

But La pelle del fantasma has little relationship to anything-goes, free-for-all improvisational music. In fact, it often doesn’t sound at all like improve, differentiating it from both the 100-copy Quando gli Uomini Adoravano la Luna out on Bologna’s Yerevan Tapes — also released in March — and Arbre du Ténéré’s first release (January 2015).

The record, which consists of two long sides, blooms thanks to the emergence of recognizable rhythms that swell among the uneasily droning ebbs. Neither Abate nor Donadini are specifically credited, making it hard to know just what’s happening here — surely the drone textures are Abate’s guitar on a heavy delay, while the pulsing bass tones might very well be synthesizer-generated. Or the whole thing might just be the work of a laptop.

Figuring out what’s going on is half the fun. The other half is letting these captivating, occasionally strained notes win you over. There’s more than a hint of heavy-end psychedelic rock here, but the microtonal influences of musique concrete balance out the raw abrasion. The drones of A-side “Ritmo di sabbia” give way to a kind of techno throb that fades in slowly and never really peaks, satisfied instead to maintain a low, steady, even teasing hum.

Whatever side you choose to play first, Arbre du Ténéré is onto something. Extracting inspiration from the very deepest roots of the world’s loneliest plant takes time, energy and unrivaled dedication. Abate and Donadini seem to have all three. La pelle del fantasma is a good reason to keep believing that where there’s a will there’s also a way.