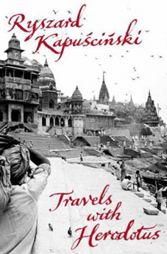 By Ryszard Kapuscinksi, translated from the Polish by Klara Glowczewska

“The road,” writes Polish correspondent Kapuscinski, “is our source, our vault of treasure, our wealth. Only on the road does the reporter feel like himself, at home.” In his final book (he died in January 2007 at 74), two roads merge stylishly: one belongs to Greek historian Herodotus, digressive chronicler of the pre-Christian world in “The Histories,” the other to his devotee Kapuscinki, who spent four decades covering the Third World, Herodotus’ pre-European territory.

Kapuscinski deftly weaves Herodotus’ tales of ancient, oracle-filled Persia and Athens (intrigue, war, incest, treachery, heroism, and brutality — “world literature’s first great work of reportage,” he says of “The Histories”) into his own youthful tales of China, India, and Africa — set mostly in the foggy repression of the 1950s. The cumulative effect is that of a Saturday Matinee newsreel, a lyrical time machine of historical anecdote. When Kapuscinski praises Herodotus’ optimism and “faith in the possibility and value of truly describing the world” (such writers, he says, “have always been uncommon”) he’s also conspiring against the tyranny of post-modern news cycles and their inherent provincialism.

Some have questioned Kapuscinski’s details and scolded him for what they claim (enviously at times) are improbable recollections. But his Greek hero (“near and dear to me”) lends him a hand: “For Herodotus, the world’s multiculturalism was a living, pulsating tissue in which nothing was permanently set or defined.” Elsewhere: “We are never in the presence of unmediated history, but of history recounted, presented, history as it appeared to someone…” Touché.

At one point, stuck in Algiers after the Ben Bella ouster, he tires of “spectacular imagery” and notes “the fallacy that one can interpret the world only by the means of what it chooses to show us in the hours of its convulsions, when it is rocked by shots and explosions, engulfed in flame and smoke, choked in dust and the stench of burning, when everything collapses into rubble…” It’s those who stay behind after the violence “to try to understand” who get to the heart of the matter. “Leaning about the world is labor, and a great all-consuming one at that.”

As a disciple of travel’s astonishment, Kapuscinski never met a destination he shied from, and his nuanced reporting honors the 20th-century.