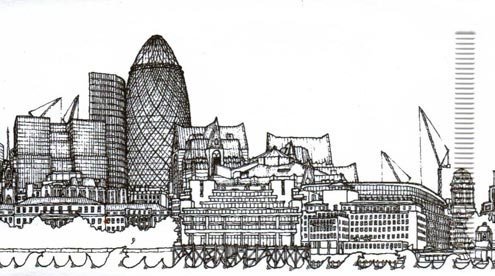 London Unfurled (Picador) reveals both sides of the Thames.
A

large, torn and stained white paper envelope arrives in the mail. But it holds, unharmed, two intriguing traveler’s volumes: “London Unfurled” (Picador) and “Thin Paths” (Jonathan Cape). Their pages are stunningly fresh of eye and mind, free of pre-conceptions. One work views the city of London from a new vantage point. The second microscopically examines an isolated Ligurian landscape.

The first unpacked book comes in elegant royal blue linen covers. As Milan-born architect and author Matteo Pericoli unveils his deft sketches of the Thames’ two riverbanks. The double-sided pages reveal each bank singly, seen from its opposite side. Despite earlier visits to the city, Pericoli had never studied it solely through its river. The project spanned two observer years. It’s a personal and astute perspective on London. Twenty-five feet long, this accordion-like book literally unfurls a striking view.

The other spoiled-envelope treat is Julia Blackburn’s diary/memoir “Thin Paths.” Her pages include a scattering of oddly antiqued black and white photos. They shadow-comment her careful notes on the period 1999-2009 when she and her husband Herman spent several months of each year in a cliff-perched, ancient and isolated stone house whose balcony overlooks Italy’s Ligurian coast. To the right of the house a steep path leads to a tiny village; above their stone habitat and beyond lies rough, now sparsely populated mountainous terrain.

Though in 180 degree variation in subject and exploratory tools, Pericoli and Blackburn share a clean slate approach to unfamiliar landscapes.

Pericoli’s “London” focuses the Thames’ north and south banks as divided by the wildly snaking river. His eye moves from Hammersmith to Battersea Bridge. Depicted in detail, his water margins are devoid of further urban background. Isolated, they reveal a skeletal template from which the giant city has spreads its tentacles.

Since his is visual tribute, the volume itself is prose-free. But it’s happily accompanied by a thin pamphlet. Brief forewords by two British authors: Ian Sinclair writes “From the Wrong Side: Looking North”; Will Self examines “The Southland.” For those — like this reviewer — not versed in London’s intricately evolved riversides, the pamphlet also provides a small key. It’s as useful in setting urban coordinates for The London Eye or The Millennium Dome as it is in identifying the tiny landmark of St. Mary’s Church. As pamphlet epilogue Pericoli sums: “Outsiders have the advantage of true ignorance. My complete lack of knowledge helped me to truly see everything for the first time.” It’s a gift he passes on to the reader.

Blackburn, too, is a newcomer… to her Ligurian life (she’s written in the past about her family and pets). In the late 1990s she and her husband visited the region, then falling in love with an abandoned, challenging site they decide to call “home.” They spend their days exploring its thin, unmapped paths. Because this author’s focus is first-person experience, Herman is actually glimpsed only once. Before he slips back into invisible role, the partner implied whenever Blackburn speaks of “we.”

Her notebook-diary attempts to grasp the nuances of strange language, place, and peoples. “A family of dormice are sleeping in a crack in the outside wall of our house…a breathing bundle of soft fur.” In the village below, Nanda’s shop keeps open door to: “the cheeses and saucepans, the votive candles and firelighters, the artichokes and sacks of dried chestnuts,” which mark a barebones, stoic existence.

Entries alternate a walker/climber’s passion for new territory and her intensifying acquaintance with local inhabitants. Men and women who, until recently, had been “mezzadri”: the half-people of an archaic feudal arrangement. Owned by a padrone, claiming share in all they had-crops, wives and daughters.

But there are no jobs or agriculture here today; the young have left. The old tell her their memories: “Write it down for me,” they say, “or it will all be forgotten.” Her notes testify to the strengths that helped them survive two world wars, natural disasters, and times of famine. In their way, these figures resemble the abandoned stone shelters and cottages that appear suddenly along nearly-erased footpaths. From them Blackburn learns the endurance she and her husband will later need during his long cancer treatments. For this remote territory evokes a strange peace: “It’s as if time past, time present and time future is stretched out around us like a vast landscape and we are walking through it on a tracery of thin paths.”

Here are two widely different traveler’s books, but deeply alike in the art of surprising, re-creating, and engaging.