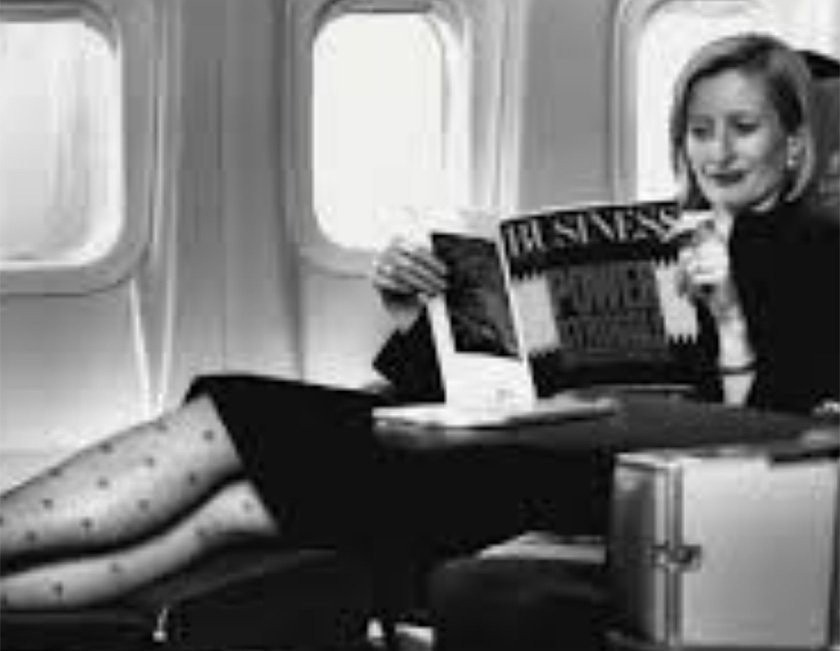 In the late 1950s, transatlantic flying was sold as a luxury. In COVID times, the medeival is in full swing.
T

he Monarch – The Trans-Atlantic Airliner with Downstairs Cocktail Lounge at no extra charge! All seats fully reclining, with a 7-course dinner, aperitifs, vintage wines, champagnes, liqueurs – all complementary!

I just traveled half way around the world simply to get home. I did not have much of reclining seat. I did not receive free champagne. Just about every aspect of the trip was an ordeal. Call it travel in the time of COVID, and it makes the wording of that 1957 ad sound like science fiction — not about the future but the past.

Some background: I traveled to Europe one year ago this month, February 2020, for what was to be a 10-week visit.

No, not science fiction….

Later that month, the virus made landfall in Italy, just north of where I was in Florence. A national lockdown followed in Italy, and others soon began closing large parts of Europe, most of it at a near standstill a year later.

Flights began to vanish as airlines limited operations. As the virus moved to the United States, my country also began to freeze up. Light restrictions soon grew onerous, masks appeared, and social distancing was increasingly enforced. The spring brought some letup (infection rates dropped) but was soon followed by a wider viral spread and even more systematic closures. Curfews came into effect.

The idea of even basic travel for work or for leisure was swept off the table indefinitely for the first time in a non-wartime environment. Stuck in Florence, I tried and failed four times to leave Italy. I tried to go north, to go east, to go someplace, anyplace open to American citizens, especially tainted because of the virus’s rapid domestic spread. I did not want to go home.

But I finally exhausted all plausible options. In this surreal landscape, I realized there was nothing I could do but go home. I am a lifelong traveler. I’ve shifted around like the wind. The realization that I had only one choice was and will remain one of my life’s saddest moments.

I purchased a ticket on TAP, the Portuguese carrier that had me leaving Rome on a flight scheduled for Friday, Jan. 29, 2021 at 3:45 p.m.

My first challenge came three weeks after the ticket was bought, when incoming President Joe Biden announced that anyone flying to the U.S. would bring with them a negative COVID PCR test date marked a maximum of 72 hours before departure. As Italian labs took up to 48 hours to process test results, I had but one day I could be tested, the Tuesday before my flight. Finding a Florence lab where that could test a non-resident in a narrow window itself took four stressful days. Thankfully, I finally found myself in the hands of a kind and efficient technician who stuck a swab into my nasal cavity, the joyous highlight of the testing protocol. It came back negative.

An English translation of the results and strictly vetted luggage in hand, I embarked on my plague-time odyssey.

The idea of even basic travel for work or for leisure was swept off the table indefinitely for the first time in a non-wartime environment.

The TAP website was clear: On flights to and from Italy passengers had to check carry-on luggage (with an 8-Kilo limit). On the flight itself, no loose items, such as a coat, could be stored in overhead bins. I packed accordingly. Both prohibitions are nonsense, at least as regards the spread of the virus.

The crowded hours that followed are best described in diary-entry style:

At 4:30 a.m., through a cold drizzle, I walked to Santa Maria Novella train station, hauling three bags, destination Rome. Once there, I caught the Leonardo Express train from Rome’s Termini station to Leonardo da Vinci Airport, or Fiumicino. I was on my way!

Italian transportation workers at Fiumicino had decided to go on strike between 1 p.m. and 5 p.m., essentially blotting out any chance of catching my 3:45 flight. It would take three hours for the beleaguered agents to figure out what to do with me, and no wonder. The delay meant I would miss my Lisbon connection to the U.S. Finally, a supervisor was called in, ostensibly armed with inner secrets that would enable me to solve the problem and get to Phoenix, my destination. She found flights through different cities, but all left the next day, a Saturday.

But there was minor catch. If I left Europe the next day my COVID test would be treated as invalid on arrival. There was some give on connecting flights in the U.S, but not outward bound from Fortress Europe.

She sent me to another part of the airport, where a kind man valiantly fought any number of flight computer demons to get me on a Friday evening Lisbon flight that would permit a transatlantic connection the next day, taking note of the COVID test situation. For this I gave thanks to the European Union and its rules, which unlike the U.S., legally compel member states to get a stranded passenger to their destination.

The airline got me a Lisbon hotel room for the night, but not before I waited on Uber drivers for 90-minutes in the pouring Lisbon rain with four others. More than 15 hours later, Uber returned me to the Lisbon airport where I spent two hours with a TAP agent attempting to understand why the U.S. airline I was scheduled to board in Boston had no record of my existence.

She struggled mightily, but the flight gods defeated all efforts at a reply. Finally, she shrugged: “Well, try to find out once you get there.”

After a six-hour wait for my flight to receive a gate assignment, I was escorted (along with other Americans and virus-risky passengers) to a group of four armed men whose job was to check our COVID tests. I calmly presented mine, and was told that, since it was now Saturday, my results were invalid and I would not be allowed to board.

This time I outsmarted them by pulling out a copy of the U.S. regulations, which clearly stated that connecting flights could be delayed up to 48 hours without affecting test results.

He didn’t believe me, of course. He took me and other members of my “dubious” tribe to a cordoned-off area known in local jargon as COVID Prison. He returned 30 minutes later and admitted I was right. Seven hostages were freed.

Social distancing rules were in place throughout the airport, of course, with airport seating taped off and distancing markers on all floor space.

But when we boarded, I was surprised to see a completely packed aircraft, “like cordwood laid to in fall,” as Mama might say. In effect, all the precautions taken to that point were made meaningless and carry-on luggage rules rendered more ludicrous than ever.

An English translation of the results and strictly vetted luggage in hand, I embarked on my plague-time odyssey.

The seven hour flight was marred only by one poor human being, a baby one, that screamed for six of the seven-hour flight. Busy on her phone, her mother had no time for providing any comfort.

In Boston, I waited seven hours at Logan airport, overnight essentially, and worked with a kind ticket agent who, after a long struggle including two supervisors, found me a ticket to Phoenix. Some three days later (with six total hours of sleep), I finally landed in Arizona, a 21-hour trip-turned-epic in every sense.

Looking back, I simply could not stay in Europe any longer. At the same time, I deeply regretted the need to return. The reasons for this would fill pages, and my trip story should suffice for now.

But I must say this. Health care workers are receiving high praise these days, and deserve it. But every airline employee I met, every flight attendant, and every supervisor, showed a dogged kind of bravery in what is a nearly impossible situation to handle rationally. What I saw fits the expression “courage under fire.” All were inspiringly polite, even to those who didn’t deserve that courtesy.

Humans proved their humanity: from the laughing COVID lab technicians in Florence, to the Boston gate agent who told jokes as we deplaned from Lisbon. I thank them.