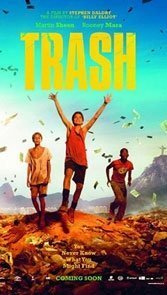 Director Stephen Daldry (“Billy Elliot,” “The Hours,” “The Reader”) hits another home run with this Rio-filmed urban drama (the film is Portuguese with English subtitles, though the city of Rio is never mentioned by name). Rafael (Rickson Teves) and Gardo (Eduardo Lui) are 14-year-olds who survive by scouring garbage dumps for precious objects to sell. One day, they find a brown leather wallet. When police offer a reward for the wallets’ return, the boys suspect it has some additional value and set out to solve the mystery along with sewer-dwelling street urchin friend Rato (Gabriel Weinstein).

As the boys follow the clues, corrupt police nip at their heels. There’s a larger agenda at work and Daldry makes it clear sleazy officials are the local norm. Rafael is captured and beaten. The only adults willing to help the kids are young social worker Sister Olivia (Rooney Mara) and a disillusioned priest Father Julliard (Martin Sheen). Why does the wallet obsess the boys? Why won’t they just turn it over? Because they’ve decided that finding the truth is right thing to do.

Daldry’s street kids are brilliant. They’re fun, fast, desperately poor but able to constantly outwit the scheming cops. They’re destitute survivors with a conscience. Sheen brings humor to his priest’s role, making the best of a hopeless situation. Footage of the trash heaps make for stunning cinematography. Based on young adult writer Andrew Mulligan’s 2010 novel of the same name.